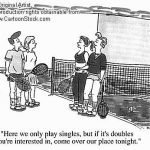 Hi Heshy. I was reading a blog of yours about the so called ‘wife swapping’ going on in the frum world. I think you’re a very funny and intelligent guy, but I was deeply upset at the insensitivity of the topic. One day soon YOU will be married, and you will understand that women aren’t whores and floozies. Wouldn’t it horrify you to inadvertently include your dear wife being that she will be a young frum woman? We should have more respect for our bnos yisroel.

Our generation is sick and we have this very bad habit of porno-sizing everything thats sacred. (dude I am totally using that term)

Look Heshy, I was single and dating for 5 years without any luck. I was also engaged once. It came to a point where my whole outlook on women and the frum world was in jeopardy. Even now I sometimes struggle to ignore the sick lashon hara that comes out of peoples mouths about ‘wife swapping’, ‘tefillin dates, whatever. Let’s not feed our negativity by giving a public forum to this garbage. Which most probably is untrue. (everyone I know goes on tefillin dates)

You’re in a position where a lot of people pay attention to your take on the frum world. Please handle with care.

Response: the original post was that I didn’t believe wife swapping was happening en masse, sure it happens, the frum community is not immune to anything that happens in other communities – we are just better at hiding it, by making people fearful that their daughters won’t get into the right seminary or get a good shidduch.

With regards to Tefillin Dates, I am of the opnion that they are actually a good thing and I have stated my reasons in the post Tefillin Dates are Good.

37 comments for “Letter to the editor: Wife Swapping in the frum community”