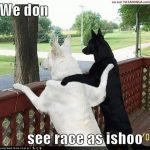 As a Latina and now a Jew, I write for both audiences. But a case of writer’s block has gotten me nowhere on an article I was supposed to be writing about interracial dating for a Latino audience weeks ago. I just don’t know where to start.

This is coming from the girl whose mother had a white boy fetish. Whose father had a black girl fetish. Whose parents came together with their fetishes and made her. I mean, well, me.

But since my mother was a virulent racist (even going as far as to throw out my dark-skinned Cabbage dolls because they were brown—as she was–and screening my friends by color), I know my willingness to date people lighter and darker than my own skin tone comes from my Dad.

The last time I visited him, I noticed something about his girlfriends (yes, plural):

But I had to ask: “Ahem, what about those Hispanic boys you dated?”

And she said, “Oh yeah, I forgot about those.”

When I dated my first (and thankfully last) gay boyfriend who was originally from Bangladesh, my grandmother asked me if he smelled. I responded, “He’s Catholic.” She looked confused. I figured it was good for her. Plus, I had no idea what I’d meant.

When I fell in love with my first Jewish boy, my aunt held an intervention. My grandmother cried. My aunt yelled. No matter, I didn’t learn my lesson and by my next Jewish boyfriend, you could tell they had just accepted the inevitable.

He was my first straight boyfriend…yeah, I said my first STRAIGHT boyfriend…this next Jewish guy. He broke up with me because I wasn’t Jewish. I took the breakup hard but my mother’s sister took it harder. After we broke up, she said wistfully, “He was such a nice boy, even though he was Jewish.”

The first time my grandmother met my Jewish husband she kept saying “I can’t believe he married you.” When she repeatedly said, “They only marry their own kind,” I don’t know if she meant white people, Jewish people or sane people. I mean, I’d already told her I converted to Judaism but I think my grandmother on this subject is in a very dark deep place of denial where she might be binge eating on communion wafers to cope.

My other aunt was a tougher cookie to crack. When she said she didn’t want me bringing my husband because he was white and Jewish, it was because she was terrified of both. The scariest thing…he didn’t speak Spanish! But he actually knew more Spanish than the Puerto Rican boy I’d dated before.

When my aunt eventually warmed up to my husband, as all my relatives did, it was because I explained he made really good rice and beans (a staple of the Dominican diet). While I make the gefilte fish, it’s my husband who makes the rice and beans and often, plantains.

The other day I heard my husband on the phone with his father catching up after a recent visit saying, “I can’t believe we didn’t eat beans all summer in LA!” He even angled the phone so he could slurp up some of the beans he was cooking and said, “Wow, I can’t live without beans. Beans are so good.”

By this point, my father-in-law was probably thinking, “What the heck did she do to my son?” And that’s when my husband added: “It’s so good to be back in New York embracing my Dominicanness.”

Because if there’s any moral to this story, it is this: if you’re going to date outside your race, religion and culture, make sure he’s willing to cook and convert (to Dominicanism, of course).