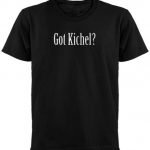 I am sure I missed some, it seems I always do, but the following list seems to be pretty complete. Jews love food, and we love our cakes and cookies – we have them at kiddush, weddings, those yertzeits at shachris, bris milahs, and countless other events. Do not hesitate to tell me which one’s I have forgot in the comments section.

Tam Tams: It seems that Tam-Tams were created just for herring, their octagonal shape allows for easy access within those hard to reach herring jar spots. Garlic tam tams have black dots in them, even though garlic is white. Tam tams also come in matzo form but are not kosher for pesach. Tam tams have mostly been replaced by the generic ritz look alike cracker and can only be had at real foodie kiddushim where the Kiddush attendees are real herring snobs.

Marble Sponge Cake: I don’t like this stuff, but still it’s a classic cake that seems to have a monopoly on the chosson tish cake market, apparently its good with scotch, seltzer or coffee, and works well for folks with poor teeth because of its soft consistency. Marble Sponge Cake tends to show up at after shachris pre work yertzeit drink-a-thons and the stale variety tends to be served at shaloshudos in shuls where the average age is 78.

Marble Sponge Cake that looks like checkerboard: Don’t be fooled by this cheap imitation, it looks as if it will have a better, denser and more satisfying taste but the checkerboard cake is merely a Marble Cake knockoff that tastes the same.

White Sponge Cake: Rarely does it taste good, or much different than marble sponge cake, but it does find itself sitting next to marble sponge cake at vorts, chosson tishes and rebbe tishes where people eat it because, there aint nothing else to eat – it tends to be washed down with mayim chayim ginger ale.

Stella Dora: Is it just me or does it seem that no matter what color or shape you get, Stela Dora cookies all taste the same. I’m talking about the ones from the mixpack of course, not of the chocolate in the middle cookies. The Stella Dora chocolate in the middle cookies (aka streimel cookies) are probably the most sought after Kiddush cookie around, save for Pepperidge farm – which I only saw once at shul.

Entenmann’s: Yes that’s how its spelled, I googled it, crazy huh. Anyway certain Entenmann’s products are more Jewish than the others and this includes the chocolate chip cookies, the chocolate covered donuts and the most sought after Kiddush product of all – the crumb covered donut that was usually cut into fours and gone before the rabbi even entered the room. With the frum community moving to the right every day it seems that Entenmann’s may have to become cholov yisroel to keep up with the schwartzes. I myself used to be a big fan of the raspberry Danish which I noticed would show up at shaloshudos but always be stale. Their cheesecakes were particularly good and I would “even out” the sides until the thing was done, and wonder where on earth in all went. Do try the Louisiana Crunch cake if you need a good dense cake that goes well with milk.

Kichel: Plain egg kichel is one of the grossest Jewish foods in my opinion, it ranks up there with borsht, schav and leftover cholent. But, sugared bowtie kichel are a completely different story. They don’t serve them much anymore, but when I spent shabbos in Chapman Lake, PA this summer I couldn’t get enough of them. For all the talk of kichel being such a good herring condiment I rarely see the stuff.

Zomicks: There is an ongoing argument as to whether the famed challah from the bakery zomick’s is bread or cake. Even their whole wheat challah tastes like cake begging people to ask if its appropriate for motzi or just Kiddush.

Zomick’s Meltaway Cake: The most popularized and overrated cake in the frum community period.

Babka: Also known to frummies as kokosh cake, is a chocolate Jewy coffee cake, sometimes soft and most of the time stale, the packaged varieties are rarely good but you can bet they will be messy. Babka finds itself at Kiddush clubs and nicer kiddushim as a substitute for marble cake.

Ruggalech: Vanilla are my favorite, but the most popular are Chocolate and Cinnamon. Frummies make the best ones, no matter how many trendy companies in your local upscale market try to tout their “all natural” rugalech “just like grandma made” its all about heimishe when it comes to rugalech

Rainbow cake: Rainbow cake used to be a favorite of my brothers, he was allotted several pieces for his Friday night treat, while I had a more Waspy apple turnover. Rainbow cakes all taste the same rarely have I seen a worse or better version, as with most Jeiwsh cakes and cookies, colors have no effect on taste.

Hamentashen: Possibly the greatest and most unique Jewish cookie of all because there is no non-Jewish equivalent and non-Jews don’t even eat them. Lately there has been a push to regulate jelly to dough ration and I have issues with this. Who wants to bite into a hamentaschen and only get the dough? Jelly shouldn’t be left out of the situation. Traditionally people over 50 like the poppy and prune better, while younger folks have been down with chocolate chips (technically not a hamentaschen in my book. I’m all about apricot and raspberry.

Jelly Roll: Maybe someone can explain to me why all Jelly roll tastes like coconut? Or why the jelly to cake ratio is so overbearing that it starts oozing out when you attempt to cut it. Also what’s the deal with just having chocolate sprinkles and not rainbow one’s?

28 comments for “Comprehsenive Guide to Jewish cakes and cookies”