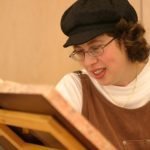 This is a lengthier version of the Vos Iz Neias comment of the day, due to the fact that the comments listed below are a great way to welcome new folks into the orthodox fold. I used to wonder why onb earth Vos Iz Neias would post articles that don’t really pertain to frummies like the following one about modern orthodox girls learning gemara in Israel – it took me some time and surfing to realize that Vos Iz Neias posts things to make Charedim look bad. In fact, if its not about Charedim busted in scandals or rioting, its a post that is carefully placed to show how closed minded and stupid those who comment on Vos Iz Neias are, think about it why on earth does the Charedi world need to know about programs like Nishmat or Brovendars, it doesn’t really make sense, besides for that it makes for more arguements.

Comments from VIN are italicized:

One of the major perakim in Bava Metzia discusses hashavas avedah, returning lost objects. How fitting would it be if these holy yiddish neshamos would likewise return themselves back to their proper place; i.e. in the home. The home that only they, the Jewish woman, can create and nurture.

A women once wakled into Reb Shach Zet’l and asked him a question in learning, so he responded by asking her; “do you know how to make a good kugle” meaning that that is ™he womens job, to cook, clean, take care of the kids, and look nice for her husband. The mans job is to learn and work.

They don’t learn that masechta. They aren’t looking for truth. If they have free time let them cook clean learn how to run a house. Read books on shalom bayis, books on chinuch and how to undertand kids. Theres so many more useful ways for them to use their time. Shame on them.

Wake up. You’re living in 21 century not 9th century ghetto where a woman was bought like property for a prutah. Roles of women have evolved in society where they can vote and succeed in careers and learning.

Very sad because a woman might intimidate you with her brilliance in Torah knowledge? This is nothing new to me because in some modern orthodox high schools girls learn gemora the same way boys do. I was very impressed with their knowledge and analytical abilities. The age old myth that women don’t have the mental capacity to analyze gemora like men do will be shattered very fast. Men will feel inferior that a wife might know more halacha than he learned in kolel. So they fear these trends.

this is soooo funny. in a commmunity full of people who force their little girls to go out and work full time jobs to support their parasite husands in kollel – the minute they hear some girls are learning the scream “but qomen belong in the kitchen…” etc.
if they belong in the kitchen then why are they the ones earning the paycheck??? let them stay home and you yungerleit get of your mediocre pilpul tuches and go support her so she can take care of YOUR bayis neeman!

This whole idea is completly against what G-d wants and stinks of yeshus and gaiva. It’s a waste of time. It’s not tznua and it’s not their avoda. Men are incapable of doing many things that women are able to do – spiritually and biologically. It’s so sad that so many foreign elements such as this have come into Judaism trying to replace it (including but not limited to: Zionism, Feminism, Socialism, “the Lubuvitcher Rebbe shlita is Moshiach-ism” and “Frumism”, e.g. not being able to sit next to one’s own wife on the bus). I hope these modern day avodah zoras stay the exception and don’t become the norm, although certain konaiyim in EY, Chabad and many “modern Orthodox” groups (whatever that means) have already “converted” to islam, x-tianity and the conservative movement, repectively.

Can someone explain why Modern Orthodox or Religious Zionist women who learn Torah are such a threat to Charedi men? Why does it strike such a nerve?

Just my own two cents, I always wondered why these people advocated for men to learn and women to work, it really makes no sense. If a woman’s place is in the home, taking her out of it to work seems totally insane. Isn’t it historically the man’s job to work and be the breadwinner. It leads me to think that the anti-learning stance that most of these people are taking comes from some sort of deeper place. Jealousy, unwillingness to admit that women have brains too – I really have no idea.