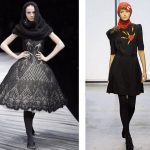 Snoods are one of the few items of clothing I have ever lobbied for the Rabbis to ban, along with bullet proof stockings, shoulder padded shabbos robes and pillbox hats, snoods are one of the ugliest pieces of clothing a woman can wear. So imagine my surprise when someone sent me an article from Yesterdays New York Times Fashion section titled Can the snood save Christmas? Shocking eh, now I wonder if it will banned afterall, not because its ugly, but because since the non-Jews are wearing it, it may lead women to want to intermarry and leave the house like non-Jewish women do.

Does this mean that frummies will now be fashionable? I honestly had thought that frummies had invented the snood, but I guess that just isn’t the case. Now, who knows what will happen, first Burberry Snoods than maybe Victorias Secret shabbos robes.

Hey, look on the bright side, at least more married women will cover up their hair and we wont be caused to sin because snoods are a heck of a lot uglier than those $3000 sheitles.

← Interesting posts from around the J-blogesphere
Kosherfest: The worlds Largest Kiddush →

17 comments for “Snoods are officially in style!!!”