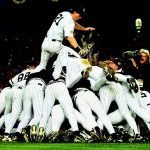 I don’t really care if they do or don’t, but the noise from across the street from my buddies house was keeping me up and I realized that a whole lot of you probably care or as Michael Moore likes to say, were convinced by the government to like sports so you don’t pay attention to politics. Moore thinks that sports is a government created program to keep your attention off of those in public office, I wonder if that’s why they put the world series right on election day?

In other news, I went to my first real comedy club show tonight and decided its time for me to suck it up and do comedy outside of the tribe, sounds good right? Well, I have always held back thinking I could make it on frum audiences alone and well, I realized non-Jews have more money, laugh harder and let me say the F curse and talk about intellectual things like being embarrassed as a Jew for picking up change.

Actually, I had my epiphany after leaving Stand Up NY and realizing that I could do better than half the comics who had been on “comedy central” or at least I think so, I started conjuring up all sorts of gigs in my head and am trying to be on next weeks “new comics” set list.

Oh yeh so the Yankees won right, does that mean their in the World Series? Wait is this the world series? Shoot, I have no idea what’s happening did the Yankees just win the 2009 world series? The two worst things that anyone can talk about in front of me are sports and pop culture. I haven’t had a TV since I moved out and don’t intend to ever actually own one (according to most shadchanim that means I’m really frum) It also means I have to explain why if I’m so frum and don’t want a TV, why I would go out to movies? Isn’t it better to watch movies at home but not out?

Come to think of it the whole watching movies vs. TV vs. maybe owning a monitor vs. maybe going out to movies is one big mind trip. What’s with all the maybes and “open to it” I mean you either watch movies or don’t. I can’t really afford movies so I don’t, but maybe I would if there was a dollar theater or a double feature drive in – wait are drive in’s tznius – its dark in there and it may be yichud, oh I would be married anyway, what if she was a niddah?

← Shidduch dating guide
The most abused expressions by frummies: “By”, “Baruch HaShem” and “Be Well” →