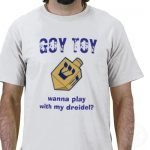 This was posted the other day in response to the post Is the word goy offensive?

I’m not sure if this will post or not. I have been learning a lot reading these posts. I have a bit of insomnia tonight and looked up the word “goyim” to find out what it meant.

My neighbor told me it was used in a temple he was planning on attending and he was very offended at its use. He told me about it (a non-jew) and so curiosity finally got me. I’ll have to say, there are other words on here that I’ll have to look into. Here is my take on the word, from what I know as a gentile.

I will not use the word as I speak English and the word “gentile” suits me just fine. I found it amusing that some who have posted here said they use goy because it’s easier to say than “gentile” or “non-jew” and they are full of it. Especially after looking at words they used in their postings in which they could have used shorter words; you know, less key strokes and therefore easier to type. Gimme a break!

Sometmes differences are obvious and don’t need to be orated. Why the constant indicators of difference we put on people; jews and non-jews alike? I’m not talking political correctness because PC is incorrect.

Some of the things I read coming from jewish folks in these posts amazed me. The arrogance and notions of superiority that some have about themselves were shocking. Because one is a Jew, does not make one better than gentiles. Did we not all come from the stock of Adam? Didn’t Abraham come from the loins of the “goy” until God chose him to be set apart? Set apart does not mean superior. Didn’t anyone learn history from Nazi Germany on superiority complexes? Or the arrogance of God’s light bearer? Anybody here read what happened to Israel in Ezekiel? God will spank His kids if they misbehave and He has used the goyim to do it. Another thought that occurred to me, was that those who are having superior feelings of being jewish, should stop and look around at what country they are living in. If it’s not Israel, then they should be grateful to the gentile nation they are living in. Especially if they are being treated well. I’m not trying to sound antisemetic, I’m tired and trying to make a point. It’s like, if you want to get all uppity about being jewish and looking down your noses at gentiles, then go to Israel because that’s the land God promised jewish folks.

Now here’s someting else to chew on. I became a Christian at the age of 12. True Christians and true Jews worship the same God. The BIG difference is that we (Christians) believe the Messiah has come and will come again to reign in all His power and glory. That being said, I love the jewish nation because my Savior is Jewish. To hate jews would be to hate my Messiah. I’m also to love God with all my heart and soul and love my neighbor as myself. So because of that I try really hard not to have a prideful outlook on myself. God is not a respecter of persons, He sends the rain on the just and the unjust. And I believe He looks at the heart of how someone is saying “goy” so I’d advise you to check yourself, when using the word.

102 comments for “RE: Is the word Goy offensive? Good comment from a non-Jew”