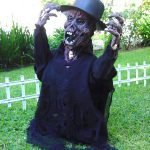 For the first time in many years, both modern orthodox and Haredi Rabbis have joined forces on a ban, they have banned ending shabbos at its normal time due to the dangers of Halloween. Many of the Rabbis we spoke to cited the kids at risk crisis to be major factor in the decision, fearing that teenagers and other people who have the potential to go off the derech will take advantage of their time off from school to go partying with the goyim.

Normally when Halloween falls out on a weeknight or shabbos, it doesn’t matter much because the kids are safe in school, but this year we knew disaster was imminent unless we joined forces and did something about it. Critics say that it is preposterous to think that kids who don’t keep shabbos anyway will listen to the ban. Duddi Mermelstien, who identifies himself as a swing ooff the derech kid mostly because he attends minyan and keeps shabbos unless there is a good open house or concert told us that this is one of the dumbest things he has ever heard of. “I don’t even hear havdalah anyway, besides atah chonuntanu is good enough for me” Its’ true, havdalah really doesn’t end shabbos, people could merely end it other ways and bypass the ban by saying they end shabbos.

Other critics are those in the shidduch crisis, who cite motzoi shabbos as the number one time to date. Shidduch Bloggers have been outraged because even though they say they don’t care about getting married, they still need dates and their friends to go on dates so they have something to write about. One shadchan told us that this would disqualify so many potential matches because it gives parents another screening item. “Did you adhere to the ending shabbos ban?” is bound to come up in conversation and when the shadchans hear answers like “my rebbe told me I could date for tachlis” they may reject the shidduch.

Much credence has been given to the fact that the ban may force some folks to violate shabbos, such as those who automatically place a Bluetooth in their ear during maariv when they say atah chonuntanu, although this may be considered “by accident” halachically, the Bluetooth crowd is equally outraged.

Still despite all of these naysayers the Rabbis agree that this will help our youth greatly. All of those kids on the sidelines, not the Priority One and Niveh crowd will be greatly helped, they will sit at home and play kugalech while their parents give out leibers candies to little children having fun playing kosherland and listening to marvelous midos machine, instead of wondering why all the goyishe kids are having fun and they have to spend another Saturday night eating pizza and watching their parents play Jewish geography.

← Lech Lecha: Get Out of Here
Heshy Fried featured on Vos Iz Neias →