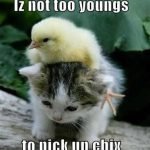 Best Jewish events for meeting girls, outside of singles communities:

Although I hear day and day out about the shidduch crisis, its rare that I actually get to see or meet single girls outside of large singles communities. When I lived in Monsey I never saw any single girls, unless you count the waitresses at Purple Pear or the bummy teenagers hanging outside of Shelly’s Too on Saturday night. Far Rockaway seems to be the same thing, as was Dallas. Sure small communities may not have many singles, but show up at the right event and you may be pleasantly surprised.

In many out of town communities and Jewish communities in general it seems the only time the girls come out of their houses to face a community that demands of them one thing, to get married and pop out kids is when something distinctly religious is going on.

Tashlich: I think that tashlich is one of the only events where single girls can be seen outside in full force, other wise you have to hang out on street corners at the opportune time when girls are headed to shul, but that’s almost as creepy as hanging outside the women’s section to check out everyone who’s coming in. Tashlich on the other hand, is usually a scene, and it tends to be a place in which you don’t have pesky parents looking over your shoulder as you chat up their daughter Gitty.

Bris Milah: I have no idea why, but single chicks love going to brisim, maybe it’s the only time they get to see a penis, or maybe it has something to do with their ingrained fascination with babies, but I have noticed that single girls flock to brisim and that’s your good chance at meeting one of em.

Yizkor: I wrote about this last week, but what better of a place then to nod at the girl over the mechitza as if to say “don’t worry hon my moms dead too.” Better then Jewish Geography in my mind, because knowing the same people only leads so far. If you find yourself outside, its your chance to pounce or at least think of a game plan now that you can easily see who is married and who isn’t.

Upsherins: Girls love little boys and not in the Priest sort of way, so you should show your compassion and head over to Mendels Upsherin and pick up some hot Mushkies.

Walking home from shul on shabbos: its pretty dinstinctly orthodox Jewish since everyone else drives they don’t have this prime opportunity to turn a simple good shabbos into a sexy “hey chaine, let me walk you home” Maybe this could just be called – picking up girls by saying good shabbos – just don’t do the Shabutt Shalom with an air squeeze.

Worst Jewish events to pick up chicks at:

Kiddush levena: I have never seen a woman doing Kiddush levana – wait isn’t it a diorysa, or maybe it’s a mitzvah z’man grama and therefore women never show up – even those weird women that always come to the shabbos afternoon gemara shiur that you only see once a week don’t even do Kiddush levana.

Shalosh Suedos: If there are women there, they usually aren’t single and if they are single, you are wondering what on earth is wrong with them.

Shalom Zachor: Because you’re probably drunk and will ruin the move you need to make at Kiddush the next day.

Weekday davening: do they even let women into shul on the weekdays? Don’t men who want to talk on their cell phones during pisukei dezimra normally daven in the women’s section on the weekdays?

Siyum: if there is a girl making a siyum she obviously isn’t frum

Weddings: It goes against logic, there are always single girls at weddings, dressed to the nines – yet they are separated in many cases and you can’t get to em. I have even been to a modern orthodox wedding in which all the seating wa mixed besides for the singles – and they wonder why there’s a shidduch crisis?