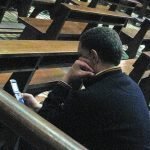 In a shocking move, modern orthodox Rabonim have begun to consider allowing texting during shul on shabbos to curb talking. For years modern orthodox shuls have tried dozens of things to curb talking during shul to no avail. Some shuls have even provided legal contracts for shul members to sign stating that they will be thrown out if they talk during shul on shabbos. As is expected the Charedi rabbinate has signed these Rabbis off as amartzim who cannot control their own flocks due to their lack of tznius.

Proponents of the move say that talking has nearly ceased on the weekdays due to rampant text messaging during shul. It seems that people don’t even talk on the phone anymore, and just like to text instead, which means shuls remain quiet for those few older folks who actually come to pray and not just to please their wives or take part in accurately timed L’chaims due to siyumim and yertzeits.

Rabbi Josh Horowitz of the Hatikva Congregation of Central Jersey is reported to have found some sort of loophole based on some of the Ravs more controversial teachings. He said that text messaging isn’t actually writing, because its not permanent, but when asked about the issue of electricity he waved his hand and told us that modern orthodoxy was always a “bit iffy on the whole electricity thing” Rabbi Horowitz did warn about possible issues with carrying the phones since some communities don’t have eruvim and he made note about the hazards of doing hagba while texting, but he and dozens of other lay leaders think it’s a novel idea.

However, some congregants are skeptical. Ruthie S. told us that shul was the one place she could escape from everyday life to, and if text messaging were allowed in shul on shabbos, what could be next. “First its texting, than suddenly they have their i-Pods in their ears and suddenly they are driving to shul on shabbos, it’s all a slippery slope. Others doubt the validity of using electricity on shabbos and say that if this goes through they are pulling their kids out of coed schools and sending them to a single sex education. Still, it seems, that no one really cares.