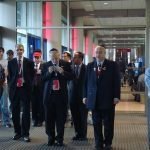 My old hometown of Rochester, NY has gotten its first breakaway minyan, it was only time in such a politically charged Yeshiva Run town, but it’s a unique case. Someone wanted to start a yeshivish style minyan in the main black shul that would start at 7:45 have a hot Kiddush with booze and have no speech – it would end at 9:30 and like all good yeshiva minyans, everyone would go home and go to sleep afterward, simple right?

Not so simple considering everyone took leave of the main minyan which starts and 9am and drags on for 3 hours and went downstairs, they didn’t want to sit through old men singing the same old tunes and a speech – they wanted to daven and go to sleep. The shul became split over the issue and it was eventually solved when the new and successful minyan (which in my view is good for the shul and brings others in) agreed to pay for a new heating and air conditioning system.

I am sure this happens in countless communities, the difference is that in Rochester a relatively small community with maybe 250 shomer shabbos families, they decided to do it the mentchlachkeit way and keep it within the shul, instead of just opening up a basement shul. To me the proliferation of shuls and yeshivas in many frum communities seems like a hindrance to fund raising and keeping communities together, they seem to be splitting communities and channeling funds away from larger institutions.

Should there really be a yeshiva on every corner and a shul in every garage in Monsey, Lakewood and Brooklyn? It seems to me as if every time a parent is pissed off at their shul or yeshiva they just decide to open up their own shul or yeshiva. It seems to me, I could be wrong due to my ignorance of finances, but a larger institution would be easier to run than a small one.

28 comments for “Breakaway minyanim and yeshivas – are they a good thing?”