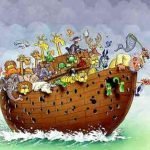 R’ Chaim Brisker asks how the jug of oil the Hasmoneans found in the Chanukah story was suitable for use beyond the first day, seeing as it wasn’t olive oil after the first day, it was miracle oil, and there is a Gemara in Taanis 24 that states that it is forbidden to benefit from a miracle.

Let us go on a tangent for a moment, to R’ Yonasan ben Uziel by Parshas Vayakhel, in Shemos 35:27, where it says the princes brought oils and spices, but it says the word “Nesiim” without the letter Yud, which Rashi explains to mean that their intentions were good, but their actions were lacking, in that they underestimated the will of the Jewish people to donate materials for the construction of the Mishkan, so their name was shortened here to teach us to act wholeheartedly. R’ Yonasan ben Uziel explains differently, and he read Nesiim with no letters as Neshaim, Aramaic for clouds.

Essentially, clouds came from Heaven, with oil and spices FROM HEAVEN!!!

R’ Chaim Zevin asks R’Chaim Brisker’s question here, how could they benefit from such a miracle?

We can answer this by looking at our Sidra, 8:11

On this, the Ramban says that “…..the olive branch was from Gan Eden”. Now THAT’S earth-shattering.

Armed with the knowledge that things exist in spheres beyind our own, R’ Tzvi Pesach Franck concludes that these cases were not Yesh Meayin- something from nothing. These were Yesh VeYesh; they were in Heaven, they were then moved to Earth. They were thus completely permissible, much like the Manna, which was not a new “thing”, rather, it is what the angels grind to make their bread. That is not to say that these were no miracles, (but rather, the miracle was not their creation, which would be forbidden to benefit from according to Taanis 24), but what was the miracle was their appearance at the relevant times.

Sneak peak at Parshas Toldos 27:25, where it says:

If we read backwards slightly, the more astute reader will note that at no point did his mother prepare wine, and R’ Yonason ben Uziel again points out the previous idea of things existing in Heaven and says

“…….an angel brought wine made from grapes that were in heaven since Creation……”

If you want to see this with Hebrew quotes go here

If you enjoyed this and want more such Divrei Torah, visit my blog Geshmak Torah

← Noah: A Dude and His Boat
Breakaway minyanim and yeshivas – are they a good thing? →