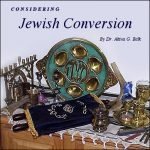 I was 14 the first time I told my mother I wanted to be Jewish. She reeled her arm back like a baseball player (she is Dominican) and she smacked me across the face.

Altogether, I think that went rather well since when my sisters told her they wanted to be Wiccans, my mother took them for an exorcism.

The second time I got it into my head to become Jewish and actually converted and everything, I…didn’t tell my mother at all. I just ran away from home. Changed my name. Didn’t leave a forwarding address. If you knew my mother, you would understand. An exorcism would have been the least of my problems.

I was 25 when I told my father for the first time I wanted to convert. He took it so well that he forgot. About the entire conversation.

The second time I told him I wanted to be Jewish, I tried a new tactic. I said, “Guess what, Dad, you’re going to have Jewish grandbabies!” I thought it was a good opening but all I heard on the other end was silence. And then my Dad just started laughing, the kind of laughter you could hear around the world. It was an international call.

My Dad has an interesting sense of humor. When I told him I was marrying my white Jewish husband, he said, “Well, I dated a Filipino girl once.”

My sisters said, “We picked our religion, you should pick your religion.” They were also convinced that I would be giving them presents on all eight days of Chanukkah.

I came out to my cousins in DR, who are the kind of Catholics that actually go to church and don’t have sex before marriage (I know, right?). My cousin, said, “Whatever brings you closer to G-d.” But I’m not sure if she realizes that this means I don’t believe in Jesus and I’m not going to be the one to tell her.

My aunt thought I was joining a cult. But she was polite about it, she didn’t tell me to my face. She told my sister who told me who told my other sister. In Dominican culture, that’s what we call bochinche (gossip). When there isn’t a new Spanish telenovela (soap opera) on, Dominicans thrive on it.

My coworkers created a pork eater’s only table. Obviously, working in high school makes you regress. On a frequent basis, we acted out parts from Mean Girls. And for some reason, I was always Lindsay Lohan falling into a trash can.

My friend Carrie thought I was just going through a phase. A phase that involved not returning her calls on Fridays and Saturdays. Giving her all my pants. Forgoing our favorite Chinese-Latino restaurant. But that’s not what pushed her over the edge. It was giving up Halloween that finally earned a “WHAT THE F#$%!” and some other stuff in Chinese I didn’t understand.

Right about then I decided it’d be simpler if I just left voicemails on people’s phone announcing my new life change. And it was. So much easier, some people never called me back. Ever. It’s been like four years, do you think they’re just busy?

Lesson learned. If you want to get rid of your crappy friends, don’t stop wearing deodorant, just tell them you’re converting to Judaism.