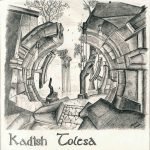 Lets face it kadesh can be pretty awkward, everyone stares at you as you try to catch up to that guy who it seems has been saying kadesh for the last 50 years, and what if you can’t catch up? I say kadesh once a year for my mom and I still cant get that stinking extra long Aramaic wordage down, let alone figure out when I am supposed to say kadesh unless there happens to be one of those artscroll English instruction siddurs around.

This week I noticed how much it sucks to say kadesh in a shul that has regular kadesh sayers, it wasn’t my time to say kadesh, but I don’t understand how could have skipped writing about awkward kadesh moments.

2 people saying it and no one realizes: When there are two people saying kadesh and one of them is not getting any amens, this happens when they are at opposite ends of the shul.

Catch me if you can: Always happens when there is a really fast kadesh sayer and if he’s nice enough he slows down, but most of the time this other guy is stumbling over his words and trying to catch up.

Let me pause for a moment while you catch up: It must be some sort of hefsik to pause in the middle of kadesh so that once a year shul guy can catch up to you.

30 second delays: This happens when the dude forgets he has to say kadesh and then starts up right before the congregation is about to move on.

Rabbi suggestion: always interesting when you have that guy who randomly shows up one day and at every kadesh intersection he stumbles and has the rabbi help him it – this always messes with the regular chiyuvs flow.

The awkward kids: so your parent died and you’re a little kid, sucks to be you, I was that kid too and everyone stares at you – suck it up and flick em the bird – kids will make fun of you too – the world is cruel.

The mumbler: did that guy just say kadesh, sure it wasn’t aleinu?

The fighters: I hear that some shuls only allow one person to say it, and in some instances a fight can start between multiple folks who are chiyuvim on that day.

Hurry up you stupid old man who never stepped foot in shul before today: I always wondered if the folks who wrote kadesh were being cruel when they decided that kadesh would be one of the hardest prayers to say if you aren’t one to daven often. All those Aramaic words are just hell when you get up to bat and can’t read Hebrew too well, let alone Aramaic.

Hurry up you stupid old man who never stepped foot in shul before today – so we’ll mumble under our breath to help you, similar to the way we help 3 yeaqr olds say the ma nishtana: Seriously, I think we should just let them stumble through the prayer, rather than helping them along – it keeps the spotlight on them and makes them look like idiots.

← Vos Iz Neias comment of the day
What’s wrong with this picture? →