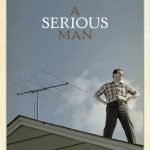 On ‘A Serious Man’ By Saul Sudin

“When the truth is found to be lies, and all the joy within you dies… Then what?”

My philosophy with film is that at its best, it can have many layers of understanding and enlightenment, much as the Torah does. The new film from Brothers Joel & Ethan Coen, ‘A Serious Man’, not only fulfills that idea, but has a story that is intimately Jewish on the surface as well. Anyone who grew up in a semi-religious home or went to Hebrew school is going to immediately find this world hits extremely close to a reality we all know too well. For one who additionally grew up in a suburban Midwest Jewish community, this is pretty much family.

The film opens with a quote from Rashi. “Receive with simplicity everything that happens to you.” Is it an actual quote? Perhaps, perhaps not. But like their 1996 film ‘Fargo’, which opens with “Based on a true story” (it wasn’t) the opening text is simply there to set the stage. Similarly, the first scene of the film is a mashal not unlike any one might be familiar with from Jewish lore. A Yiddish speaking man returns home to the shtetl telling his wife that he received assistance fixing his cart on the way from such and such a man. His wife claims that that man has been dead for some time and must be a Dybbuk. Is he? The point is never definitively resolved and veteran actor Fyvush Finkel, who plays the ghostly Rav, is even credited in the end credits as “Dybbuk?” But what is left ringing in our ears as the audience is the Shtetl wife’s assertion that they must be cursed by Hashem.

Flash forward to late-1960’s St. Louis Park, Minnesota and we meet both Physics Professor Larry Gopnik (Michael Stuhlbarg) who is undergoing a medical exam and his son, Danny Gopnik (Aaron Wolff), who is in Hebrew class, secretly listening to (perpetual theme song of the film) Jefferson Airplane’s “Somebody to Love” on a pocket radio. From there the film takes off as we focus mainly on Larry’s troubles on all sides of existence. Struggles at work with students and the tenure board, struggles at home with his wife, his goy neighbors, his lay about brother who is staying with them and of course Danny’s upcoming Bar Mitzvah (Danny is hilariously learning to lein from a record of “Rabbi Youssele Rosenblatt Chants Your Haftorah Portion”). On top of all this of course are struggles with faith and with Hashem. No stone is left unturned and the hits just keep on coming leading Larry to seek the council of his local Rabbeim.

Each Rabbi shown in the film is of a different ilk. One is the young upstart Junior Rabbi. Another is the older leader of the Reform Congregation Bnai Abraham that the Gopniks attend who tells his own mashal of a local dentist who received a sign from Hashem on the teeth of a goy patient (the gamatriah used in this scene is incorrect to the corresponding letters, but it’s used to humorous effect). The third, Rabbi Marshak, is an ancient sage who no longer does much but sit in his office. As seen in the trailer, when Larry tries to seek his sage advice, the secretary turns Larry away because “The Rabbi is thinking.” Each kernel of wisdom we receive from these three Rabbeim seems absurd on the surface, supplying our protagonist and us as the audience with more questions and no answers. But upon deeper inspection, I feel that everything we need to crack the code is right there, much as the entirety of the Torah is built into the letters themselves.

Physics also plays a key part in the film, always with Kabbalistic undertones painted in. We see Larry teaching twice, one lecture is about Schrödinger’s Cat and the other on The Uncertainty Principle. Addressing a student, he tells the student that he received a poor grade on the test because he understood the simple parables like “the cat” but not the math that lies deeper below the surface. This is one of many lines of dialogue that allude to our own attempt at a deeper understanding both of Torah as Jews and this film itself (another is when Larry is talking to a woman at the beach, and she says “it can take a while before you feel what was always there, for better or worse.” As well as “We’re Jews, we have that well of tradition to draw on, to help us understand. When we’re puzzled we have all the stories that have been handed down from people who had the same problems.” Larry is essentially a modern era Iyov). Without delving too far into it, Schrödinger’s Cat relates directly to the deaths that occur in the film, as well as the idea of Larry as entangled in this mess he finds himself in. In the case of The Uncertainty Principle (which, when scrolled across an entire blackboard, curiously contains a number of Hebrew letters involved in the math), “It proves we can’t ever really know what’s going on.”

Is Larry a descendant of the Yiddish couple, cursed for all time? Or is a point simply being drawn about Jews in general? Is existence one horrible occurrence after another? Do curses really exist or are we simply being tested? Where is Hashem in it all? All these questions are valid thoughts to keep in mind in this complex film, which despite its surface humor (and don’t get me wrong, the film is extremely hilarious) really has an existential tone running throughout. The film ends on a question mark much like the mashal at the beginning of the film or the Coen’s Academy Award-winning ‘No Country for Old Men’. Don’t feel that this is a cop out. The film ends where it is meant to end. It simply drives home a theme that I saw throughout, which is what does it take to make a person put a continuing series of uncertainties into context?

‘A Serious Man’ is playing in limited release currently and will be expanding to theaters all over the U.S. this Friday. For a listing of where it will be playing near you, see Film in Focus