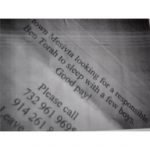 Contrary to what many people may think, my years in yeshiva were some of my best, I made friends that would last a lifetime and learned some invaluable lessons ? like the best places to hide porn and that you could buy a black hat for $18 at sears that looked just like the more expensive frummy one?s that most of the kids in my yeshiva wore. Nevertheless, I make fun of my time there and one aspect I think that anyone who lived in a yeshiva dorm can relate to is the dorm councilor, the dorm councilor or DC as I will call him was there to make yeshiva life a little harder and little more miserable, but sometimes they made your life better.

Spending 5 years in yeshiva, it took me five years of high school and I didn?t even graduate, taught me many lessons, it also allowed me to live through the misery and the joy of several different dorm councilors. DC?s ranged from the alter bachur (older yeshiva guy who for some reason could not find a shidduch ? this was before they could blame the shidduch crisis, Alter Bachurs are always weirdoes by the way) to the power tripper who was probably treated like dirt as a kid and needed to take revenge on us por high schoolers by imposing Stalinist like punishments against minor offenses like not having your light off and the exact lights off time. We also had the ?spaced out? do whatever the F you want DC ? whom everyone loved.

During my first year of yeshiva, in the yeshivas heyday the DC was tough, there were two of them. The Rabbi whom we called Lefko would hop in his car if he suspected any foul play when we were checking out (checking out required you to report to the DC exactly where you intended to go and explain why you wanted to go there) and follow you to see that you actually went where you were going.

Rumor has it that Lefko would buy a movie ticket and go to the movies and sit behind yeshiva guys who committed the cardinal sin of attending a movie (sneaking out to the movies is one of the facts of yeshiva life ? although I have no idea what the joy was ? growing up with cable TV in the house put me in a different class) he would tap one of them on the back at the best part of the movie and drag the surprised yeshiva guys out of the theater. There were two different rumors ? one that he would wait till the best part, and the other that he would wait for the guys outside the theater, I heard that he would never give them a ride home.

Lefko also employed the police interrogation tactic of seeing if stories matched up. Stories never matched up and so kids got caught doing all sorts of illegalities. I myself never attended movies, but as a baseball card addict I used to carry all of my good cards on shabbos with several friends to go to trading events at this local mall ? besides for breaking shabbos by carrying (I never really equated carrying and using electricity on the same level ? and yeshiva high schools too often assume that kids know this) we were going dressed in weekday clothing in the middle of the afternoon ? we were never really caught.

In my later years I also met up with girls from the girls school, but that wasn?t until I knew the DC?s tricks well enough not to get caught.

My second year we had this guy by the name of Ari Lind, I only mention his name because he was a yeshiva guys dream of what a DC should be. He was semi-spaced out and felt that if you were nice and cordial kids would be nice back. I remember him allowing us to go out after curfew on cold winter nights to play ice hockey on the local pond, this involved bais medrish guys who couldn?t go during normal hours and was labor intensive as we had to shovel a court out of snow. He also wasn?t a bitch about secular music, some DC?s would take away your stereo if you listened to non-Jewish music out loud.

Our yeshivas policy on music was kind of whack. You couldn?t have recorded non-Jewish music unless it was instrumental ? this was before I fell in love with jazz or classical music. You also couldn?t play non-Jewish music out loud, but you could listen to the radio with headphones, which I found odd because prerecorded music seems better than listening to Howard Stern on the radio (everyone listened to Howard Stern back in the day)

Ari wasn?t too bad, he would tell you to turn it off, but other DC?s would take it away fine you and get you trouble ? mostly because they could ? Ari was more into casual warnings, but others worked on a zero tolerance policy which I am sure pushed some kids to go off the derech in response to the hypocrisy of dorm councilors and other higher ups in the yeshiva.

One year the yeshiva macher decided to become dorm councilor, probably a great decision on the yeshivas part because we feared him dearly ? I am sure he could have gone on to become a great lawyer if he wouldn?t have entered the ?hockers gone ebay? world, because we feared his cross examinations ? I kind of liked him, but many folks really disliked him. He would sit by his window and watch whoever left the building and make a note of the exact time. When I started yeshiva you could leave and enter from the front or the back of the building, leaving from the front allowed you more freedom from being seen, until they decided to lock the front door ? forcing you to leave out the back with clear views from the Rosh Yeshivas office and other beis medrish guys windows.

This macher guy would interrogate you and he could tell easily if you were lying, he was also one of the first DC?s I had that would require receipts (in order to make sure you weren?t at a movie or a strip club ? receipts from the location you went to were required ? sometimes every half hour) which made it a big pain ? I remember some guys strategizing about how they would sneak out of the movie theater ? buy something in the mall and come back.

Thank God my DC?s and Rabbis trusted me to be riding my bike or skating, since I was riding or doing some sort of outdoors thing so often I gained the trust of these individuals through the years. So much trust that despite my shaggy hair, baggy clothing and association with all of the kids at risk I was never drug tested, even after dozens of kids were thrown out they never tested me ? which is good because I didn?t smoke weed until I was 27 years old.

Some people may be quick to call the macher expert interrogator dorm councilor a schmuck, but I think he was more smart than schmucky, he really knew how to cut deals and make some money too ? but he was honest and in my opinion a good guy. Later in my yeshiva career we actually had a schmuck for a dorm councilor.

We knew he would be a schmuck from the beginning, it may have been in the shadow of people he was related to ? but he initiated detention, something that the yeshiva never had ? but of course you could buy your out of detention. He would also love to snoop around your room ? traditionally dorm councilors didn?t snoop unless it was an official dorm raid, in which they kicked everyone out of the dorm and went all out by flipping over mattresses and tearing down low ceilings in search of contraband.

This guy would use everything in his power to get your trouble and I think he enjoyed it, he also cracked down on things like leaving fro long periods of time on weeknights. I remember one time quite vividly as he publicly embarrassed me by calling me out on reading pornographic magazines (we all looked at them but who ?read? porno) because I was ?caught? reading a mountain bike magazine that had a woman riding a bike on the cover ? she was wearing traditional cycling garb and he started screaming at me for bringing in shmutz to the dorm, he really went overboard ? tearing the magazine in half and telling me all the horrible things that would happen to me.

I have heard through my years that our yeshiva was nothing compared to friends of mine who couldn?t even have secular books and the only magazine allowed was US News according to my friend who went to Ner Yisroel was kept behind the librarians desk and when you asked for it he would say ?oh you want the US Zinus? Some yeshivas didn?t allow their students out at all and others would kick you out if you were caught with a non-Jewish CD ? ours wasn?t that bad ? but then again Rochester is very low on the yeshiva food chain.