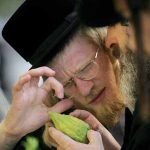 A ring of bio engineers has been discovered to be a part of a major Esrog scam by authorities in Israel. Information about Esrogim bought in Brooklyn containing unusually weak pitoms led authorities to make the bust of these men that had figured that engineering an unusually weak pitoms would boost sales by forcing folks who purchased these esrogim to return to the stores for a discount on a second esrog when their pitom fell off.

Moshe Chaim of Boro Park told us that his pitom fell off after a thread off his talis became entwined in the esrog, he expressed dismay at the incident since it was the first day and he wouldn’t be able to use the esrog due to it being non-kosher. “Usually my kids break it off, but this year it wasn’t on long enough for them to break it off” Moshe Chaim’s Rav told him that he could use the esrog anyway, but that if people found out he used an esrog with a broken pitom his daughters may not be able to get a good shidduch, when he heard the news – he immediately bought the largest esrog available – because of the segula to do so.

The bioengineers behind the esrog scam had also hired a marketing agency to create Kupat Ha’ir –like signs depicting various Rabonim using their esrogim to encourage people to purchase them. They also offered a 50% discount for esrogim with broken pitoms – which seemed unreal – since most esrogim dealers are merely smugglers who set up shop in shoe stores and pizza shops around Brooklyn and other holy cities.

The bio engineers and others who helped set up the operation to sell esrogim with unusually weak pitoms faces prison time and community service. Already riots have erupted in Charedi neighborhoods demanding they be released and that the Israeli government apologize for their crusade against orthodox yidden.

Frum Satire News notes that none of the Bioengineers was frum, since attending college in Israel automatically revokes your membership to Charedi society.