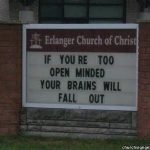 The term open minded means something completely different when you are talking to frum people about shiduchim, it doesn’t actually mean that someone is open minded, it usually means that they found something about the girl or girls family different then their own and I have heard many in my day – I have also included one’s some friends of mine have told me and none of these are made up.

As an illustration I will tell a brief story, I once went to a shadchan in Monsey who told me that she noticed I was open minded because I wore a colored shirt on shabbos. She could have used the term “modern” but since she is in shidduchim I assumed she used the term open minded to show some point that I didn’t get. Either way, I wondered to myself if that meant all of the people seated at her shabbos table including her husband were closed minded since they were wearing white shirts?

The parentheses below are to show what was going on in their minds as the people said why the girl was open minded.

She’s an open minded girl because…

Her family has a dog (frum people are notoriously afraid of dogs, and so she must be open minded)

She used to snowboard (just like used car dealers, shadchans have to use every selling point they have at hand, even if she snowboarded once she must be open minded)

She is studying to be anything besides PT, OT, Speech or Nursing (if a girl had the bals to break the regular routine and do something like accounting she must be different)

Her parents are baalei teshuva (I used to think it was a sure thing, but so many times they were baalei teshuva deniers – those folks who would never admit they used to be hippies – which meant they were just as bad as regular frummy parents – even crazier sometimes)

She doesn’t mind if you don’t wear a hat (doesn’t mind usually translates into, “after we get married things are gonna change)

She is really into going to the gym (red flags)