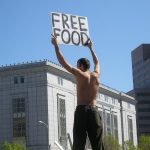 Its Carlos and Gabbys night at the yeshiva, this usually means high attendance, the people who run the place aren’t stupid. If you want to get some punk ass 15 year old priority one kid in the door on a Tuesday night when they could be settling in for a long night of playstation instead of learning – you have to provide a reason for them to show up.

God and torah just isn’t good enough these days. Hence, the reason I am sitting on a folding chair in a basement in Far Rockaway stuffing my face with what may possibly be the most unhealthy kosher food available in NY, save for Dougies and Kosher Delight.

I have a piled my plate with onion rings, French fries, half a burger, a burrito and a pastrami eggroll, then like everyone else at the table I took a bowl of Carlos and Gabbys famous avocado ranch dressing which tastes nothing like avocado, but is great anyway. Everyone’s plates are piled high, napkins and forks are afterthoughts, as is chewing with your mouth closed, this is yeshiva after all and no women are allowed, maybe they are but this is a world away from Barnard and Far Rockaway seems devoid of feminists or women who want to learn anything besides kosher by design and how to was and set a sheitle.

The conversation is classic yeshiva guy conversation, its about cars and car leases. I am not one for leasing, but it seems that one of the hocker things to do is brag about your lease. I think a lot of guys lease cars because they cant actually afford the cars they have. For instance the dude sitting across from me has a fully loaded Maxima and pays $500 a month, how on earth he affords this is beyond me – until I realize he probably lives with his parents, doesn’t do much for entertainment and spends his money on clothes and food, with vacations of the go to the casino and grill type.

Someone learns I am in the used car business and asks me if I would buy out his lease, he can’t afford to pay anymore. That’s what happens when you have guys who make $400 a week with very expensive cars – but I guess the status is worth it. The word disgusting to imply speed is thrown around in classic yeshivish hocker fashion – the words sick and disgusting are classic to describe these things.

Suddenly the conversation is on to sports and it becomes a screaming match, I myself have no idea what people see in sports talk, but these kids are into it, including some guy who just thanked me for keeping him entertained at work. Someone has to bust out the cliché Rebbe line “If you were as passionate about learning as you are about gemera” and no one listens, they are talking and shoving food draped in mayo sauce into their mouths without missing a beat.

This is a nightly event at Rabbi Groeners yeshiva in Far Rockaway, its located in this tall redone house on the corner of Caffery and Mott, walking distance from my house and one of the only reasons I look forward to going to visit my dad in Far Rockaway. The only other thing I look forward to besides hanging out with my dad is checking my mail and going to learn at Rabbi Groeners, happens to be that going to any beis mderish is a social event for me, I get new ideas to write about, meet new people and get to connect with my roots.

The problem I confront most of the time is dress code, I don’t like changing much and usually don’t carry pants in my car and luckily for me the Rabbi doesn’t care how you look or much of what you do (I can wear my sandals on shabbos and not get a second look) – he cares that your there – Chassidic by nature he is the type who doesn’t look at a bunch of guys hanging out in the building as loitering, to him these guys made some sort of effort to be in yeshiva rather then doing God knows what. Obviously I’m a big fan, and he asked for a shout out, I doubt he thinks blogs are kosher considering that last night he told us that facebook was an issur dioraysa – when someone mentioned there is a Facebook fan page for him, obviously phone usage isn’t assur because like everyone else in the yeshiva he is a addicted to his phone and like everyone else he texts and answers calls during shiur, its laid back like that.

We are learning succos, the guy I’m sitting next to is French and he knows me because his old roommate and I used to work together – I have no idea who he is. Then some large guy with peyos near me says gives me the “frum satire” nod – the hey whats up love your stuff nod, in yeshiva settings surprisingly or not the most people know who I am and come up to me. I finally learned that those guys looking at esrogim with magnifying glasses are not just Esrog snobs, they are actually looking at something, like whether or not the outer membrane is peeled or if there are any unnatural holes or folds, interesting stuff.

In the center of the table is a portable credit card machine and every few minutes someone comes up to the Rabbi and swipes, no one just swipes, everyone makes a ruckus about it – “how much are you swiping?” gets met with “that’s between me and God” type of answers. At least 5 people swiped, I swiped $100 for some Yom Kippur seats, the first time in my life I have paid for High Holiday tickets, I usually go to chabad where it’s free and more relaxed, but I figured this year it would be good to inject some spirit into my veins and yeshivas are the best place to do it – I also know I can go without wearing a suit, very important to me and they have tables – for anyone who needs a table to daven you know that a table on Yom Kippur is gold.

The learning is only an hour, combined with all the interruptions by credit card swipers, text messaging, Jewish Geography and fist bumping it may be just 30 minutes – but I have a feeling its not just about learning, its more about community, free food and a good weeknight chill or for some folks a moment away from their kids and wives.

22 comments for “Will learn for free food”