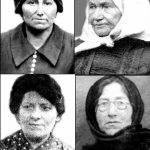 Growing up, I thought obsessing about hair was a “Dominican thing.” Later, I found out it was also a “black thing.” And after converting to Judaism, I realized it was also a “Jewish thing.”

I can remember back to a time when I looked forward to covering my hair. It was exciting. So much cooler than a wedding ring. It was a big whopping sign that I’d gotten married. It made me feel special.

But then I started doing it. Every day was a bad hair day. The head coverings damaged and dried out my super sensitive kinky hair. I cried all the time. No matter how bad my hair looked, my husband told me he loved it. But I didn’t. I ended up shaving my head.

What I liked most about having no hair was that I could suddenly wear all those trendy hats I saw women at shul wearing. I could fit in. I didn’t look like that monster from the Alien movies or Marge Simpson because my afro was threatening to explode from underneath my hair covering. I looked like those dazzling women on coveryourhair.com.

When I went to get my hair cut for the first time since growing back my hair, I took off my head covering which much shame. It was matted, brittle, dry, damaged, disgusting. And embarrassing. It didn’t matter how much product I put into it. When my hair stylist saw my hair come out of my head covering, she couldn’t hide her horror. She gasped.

But nothing could prepare me for what she said after she had combed through it.

“You’re losing your hair,” she said.

“I see it in a lot of my Orthodox clients,” she replied quietly. “Especially the ones who wear wigs.”

“But I’m not wearing wigs,” I told her adding that a wig wouldn’t fit over my hair.

She ran her fingers through my hair. “It’s really thinning,” she said. “See how your hairline has receded?”

I hadn’t noticed. I hadn’t looked at my hair for a year. It was too shameful. But she was right.

After she washed and styled my hair, it looked wonderful. Better than it had in ages. But as soon as she was done, I pushed it back into the large black headscarf my friends made fun of because it was “too frum.” The hair stylist pursed her lips but said nothing.

Covering my hair was ruining my self-esteem, causing my hair to fall out, but I wouldn’t stop. Not covering it would have made me stick out. Besides, I knew what people said about women who didn’t cover their hair. Other women were not “very observant” if they stopped covering their hair but as a convert, I feared they would say worst.

I didn’t notice it at first. As a freelance writer, I spent most of my days at home, alone, where I didn’t cover my hair. Outside the home, I found myself tugging listlessly at my head coverings, not just because they were itchy but because my head hurt. I left Shabbos meals because of pain that started at my head and traveled down to the rest of my body. I got headaches no matter what head covering I wore so I made it a point not to go outside where I had to wear them.

Finally, I threw a tantrum at the supermarket because my head and neck hurt so much. My fibromyalgia, my chronic pain condition, had flared up something fierce and I couldn’t think straight much less be polite.

“You weren’t in this much pain before you left the house,” my husband said. “What happened?”

It dawned on me. “I covered my hair,” I said. It was so obvious. I had always been tender-headed. Even headbands had troubled me as a child. But back then, I could carelessly remove my head covering at will. Now I couldn’t.

“Take the head covering off,” he suggested.

It wasn’t just Jewish law I was worried about, didn’t he remember what my hair looked like underneath? Instead, we left the supermarket and I shrunk down in the passenger seat of our car, removed my hair covering and cried.

There was another trip to the hair stylist. The update? I was still losing my hair. It was still thinning. It still looked like I’d stuck my finger in an electric socket.

Before a wedding in Monsey, an ultra-Orthodox section of New York, I sat in a pile of my head coverings (hats, berets, head scarves, bandanas, you name it) crying. No matter what I put on my head, it hurt something awful. And with my longer hair, many of the head coverings didn’t fit. My sister sat with me, holding my hand, picking out scarves, trying to be helpful. “What about this one?” I shook my head.

We settled on a Rastafarian beret I had purchased at Venice Beach just after getting married. (My husband thought they were cool. And every other hat at the boardwalk hat store hadn’t fit my head.) I knew that I might as well have been wearing a bull’s-eye. But my hair fit in it and while my head still hurt, it hurt less. “Do I have to go to the wedding?” I asked. “Do I have to leave the house?” My husband insisted I did.

At the wedding, a sea of expensive sheitels, no one said anything about my beret. When I made it to dessert without a single comment, I exhaled deeply. I had survived. Or so I thought. Until the woman wearing a sheitel next to me leaned over and told me what she thought about my beret.

According to her, it was obvious I was wearing a Rastafarian beret to “make a statement.” I was a rebel! Obviously, she said, I was one of those “left-wing -Modern Orthodox-Riverdale hippie-Rabbi Avi Weiss-following” women. If I hadn’t felt like crying, I would have laughed. All my girlfriends in Riverdale who went to the same synagogue owned expensive sheitels they wore to weddings. None of them owned a Rastafarian beret, much less any beret.

Growing up in Washington Heights, if you didn’t have the latest sneakers, you were teased. Nasty little children yelled at you: “You’re on welfare! You’re poor!” In actuality, most of us were on welfare, even the children in new sneakers. And in high school, my guy friends told me that girls who dressed “like sluts” were easy. But I met girls in mini-skirts and halter tops who had never kissed a boy. I learned not to judge people by what they were wearing. But that didn’t stop people from judging me.

I heard a rumor recently that some rabbi thinks my conversion should be revoked because they heard from someone else that I’m either not covering my hair all the time or I’m wearing pants. At a speaking engagement, after I had spent all morning carefully picking out the perfect headband that gave me the least amount of pain, I heard a man in a black kippah and white shirt tell a woman that I was definitely “not Orthodox” because I wasn’t covering my hair. Instantly, I felt small, a little girl in Washington Heights again wearing my orthopedic clunky black shoes.

There was never a class during the conversion process where a rabbi sat me down and explained that choosing between a sheitel, a tichel or a headband would make me part of one Jewish community and make me unseemly to another. But if you look, apparently this class is being taught on our street corners, at weddings, at bar mitzvahs, and well, everywhere you’ll find a bunch of Orthodox women crowded together bochinchando (that’s what Dominicans call gossiping) about each other.

Does the color of a kippah really tell you whether a person davens with kavannah? Does a sheitel tell you how stringent someone is about keeping kosher or saying after the bathroom? To me, being Jewish is about more than the clothes you wear and the head coverings you don or don’t. At least, that’s the Judaism I signed up for, what about you?