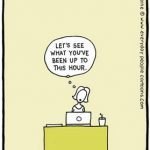 I use Facebook and google to check up on potential dates, but honestly who doesn’t? Seriously this used to be a shady stalkerish tactic, but times have changed my friends, and internet back round checks are the way of the future.

Besides, stalking your date prior to going out with them is a lot of fun. I always search google images first, because I believe in getting the bad news first, but luckily for me google images usually comes up blank, it seems that every Jewish girl name search in google brings up some sort of genealogy chart and pictures of women old enough to be your bubbie.

I have been doing google girl searches for a long time before it has been acceptable to admit this. Back before Google became an official verb, I would do this, but it had to be kept secret, very secret for the one time I assumed the girl was relaxed enough to hear that I found her profile on Onlysimchas.com but was disappointed to find no picture she demanded to know how I had found it? I told her that I Googled her and she went berserk, like I was some freak for wanting to know more than what our mutual friend had told me, because everyone who wants you to go out with their friend switches to sales mode when talking about their attributes.

One day, probably around the same time that Facebook opened its doors to tweens and preteens it became acceptable to conduct extensive back round checks on the internet of potential dates. Facebook is basically inviting you to look for dirt and thanks to my favorite feature tagged pictures the girl you are researching can’t just hide her true figure behind a well placed column and a thinning black skirt, you would be surprised to see how different people look in their profile pictures and their tagged pictures.

Does this mean that blind dates are dead and the matchmaking industry is going the way of the American automakers?

Blind dating has its virtues, for me it was a rush of sorts, kind of like playing the lottery, you never knew what was going to happen, although I mostly assumed it be crappy until I would win once in a while. I do wonder if I will miss the joy of haggling with the neighborhood shadchan (matchmaker) and finding subtle ways to reject the dating offerings from my Charedi cousins in Monsey?

Although googling and facebooking potential dates can be a lot of fun and informative, one should an open mind. People are too quick to judge folks based on their friends, half naked drunken pictures taken from their spring break in Cancun and whether or not they are a Yankees fan. There is more to people than what they put on their Facebook profiles, although if you find their blog you can pretty much assume it is describing their alter ego and what they wish they were but never will be.

Do you have any interesting shidduch dating stalker – backround check stories?

← Help my brother open a Moishe House in Boulder Colorado
Olgas on Smith: My favorite restaurant in Brooklyn →

20 comments for “Did Google and Facebook kill blind dating?”