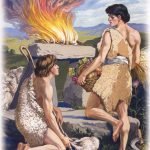 1. And Cain came upon his brother and said, “Hey, what are you doing there?”

Abel ignored him. Cain came up behind him and asked again, a little agitated this time, “I said what are you doing there?”

2. “None of your business,” Abel said, without turning. He was hunched on the ground, focusing intently on the task in front of him.

“I’ll tell you if you tell me what you’re doing,” Cain offered.

3. “No deal,” Abel said. He picked up a sharpened twig and applied it to the object in front of him.

“If it’s idols the Lord will be very wroth.”

Cain paused. “Better not be,” he mumbled under his breath.

4. That night at dinner Cain appeared at the table in a sulk, but Abel seemed quite satisfied and bounced a little as he chewed, as if he were holding in a piece of exciting news.

5. “Well,” Adam said after a lull in the conversation, “Have either of you two boys given any thought as to what you’re gonna do with your lives?”

Abel, who had anticipated the question, eagerly jumped in.

“Yeah,” he said, “I’m gonna be a shepherd. I found some unhewn logs and arranged them into this corral, see, and I’m gonna keep the sheep in there during the night. And during the daytime I’m gonna take ‘em all around to graze grass. 6. And the best part is, I can cut their fleece for wool and make clothing out of it- it’s the most comfortable clothing you’ve ever felt. It’s nothing like these stupid leaves we’ve got to wear all the time. And tomorrow, I’m gonna make Mom the most beautiful dress in the world.”

7. “It will be the only dress in the world,” Eve laughed.

8. “That sounds like quite a plan, son.” Adam said approvingly.

9. “Yeah, and when the flock multiplies, we can start having sheep for dinner.”

10. “And what about you, Cain?” Adam said, turning to his oldest son. Have you given any thought to what you’re going to do?”

11. “I don’t know,” he said, looking at Abel pointedly. “It seems like all the good jobs are taken.”

“Now, now,” Adam said, “they always need tillers of the earth. That’s one job that you can securely rely on.”

“But I don’t wanna be a tiller of the earth.”

“Well until you come up with something better to do, I’d appreciate it if you try. Look at Abel- he’s always hard at work on some project or another. He may have just invented a new type of clothing. 12. The fruits of his labor are commensurate with the amount of effort he invests, you see.”

“Now you listen here son, we will not have that language at this table, you hear?”

“Abel, fuck you!” Cain cried, abruptly rising from the table and running away.

The three of them froze.

14. “Sounds like someone got up on the wrong side of the bed this morning,” Abel said after a minute.

15. And the Lord God saw what had happened at the dinner table and knew of Cain’s jealousy, but didn’t care, because Abel was everybody’s favorite and Cain could be such a pain in the ass sometimes. 16. And Cain was not satisfied with his task, and walked along with his hands in his pockets, kicking at the dirt petulantly. 17. Abel applied all his energy to mastering the art of being a shepherd. 18. He experimented with barn doors, new shearing techniques, fed his sheep different types of grass at different times of the day, and eventually, had raised himself quite a flock. 19. Cain, on the other hand, had reconciled himself to the fate of being a tiller of the earth, but because his heart wasn’t in it, managed to grow only small and puny vegetables.

20. “What are you looking at?” Cain asked grumpily. He was standing on a ladder which leaned up on a tree, and he was inspecting its fruit closely.

“Well how was I supposed to know?” Abel asked innocently.

22. “Perhaps you are right, my brother. I probably should have given you the benefit of the doubt. I’m just on edge because I’ve been busting my ass over these grapefruits all season ’cause they’re part of the offering I’m gonna be bringing to God.”

23. “Part of the what-now?” Abel leaned forward with interest.

“Of the offering I plan on bringing to God at the end of the season. He does good by me, and I want to show him my gratitude.”

25 And so it came to pass that Abel, motivated by the idea of outshining his brother, went about preparing an extremely lavish and extravagant offering to God. 26. He got to work that very day building an altar of polished stone, and shearing his best sheep in preparation for their slaughter.

27. Adam was exceedingly pleased with his sons’ efforts, and was not stingy in his praise for Abel.

28. And the end of the season came, and on the day on which Cain harvested all his fruits Abel was ready and waiting for him. 29. And as Cain piled his fruit on the makeshift altar he had hastily constructed the day before, Abel asked him smugly, “Is that all you’ve got?”

30. And Cain said, “Why? You think you’re so much better than me?” And Abel simply pointed to his altar, purposely constructed across from Cain’s. It was laden with sheep and even some vegetables Abel had grown on the side, all of which he was completely sanguine about burning, so that the Lord might accept his gift and love it more than his brother’s.

31. “Hey? What’s the big idea?” Cain sputtered, as the lit match he held started to singe his fingertips.

32. “Come on, big brother,” Abel teased. “Can’t handle a little competition? I know, let’s make this interesting. You bet the farm, I’ll put up my flock.”

“Oh, shut up,” Cain said miserably, and dropped the match on his offering and waited for it to burn. 33. Abel ran quickly to his altar and set it ablaze, and the Lord glanced down at the two offerings, but it was no contest. Abel’s offering was accepted by God, and burned brightly, the smoke rising in a pillar to the heavens. 34. But Cain’s offering burnt not, and merely smoldered and produced a nasty smell.

36. On that day Cain knew for sure that his brother was a prick, and wondered if God might be one, too.

37. “Why are you annoyed?” God asked him, “Why has your countenance fallen? Surely if you improve yourself, you will be forgiven. 38. But if you do not improve yourself, sin rests at the door. Its desire is towards you, yet you can conquer it.”

39. “Fuck that,” Cain said, for he was a shrewd and ruthless businessman and preferred simply to eliminate the competition.

← Olgas on Smith: My favorite restaurant in Brooklyn
The Rastafarian Beret and Other Adventures in Hair Covering →

12 comments for “Cain and Abel in a new light”