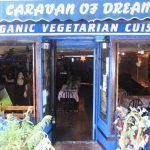 I ate at Cafe Viva on the upper west side last night, I have heard countless people rave to me about their pizza, and so I decided to pay them a visit before an event I went to at the Jewish Museum. On the window there is a kasharus certificate, and there were yarmulkes in the place, but Cafe Viva is open on shabbos which many people in the frum community are quick to call treife.

Cafe Viva is under the hashgacha of Rabbi Yaakov Spivak, a talmud of Ner Yisroel, but some on the community refer to the UKS as ghetto kasharus, in that it isn’t as thorough and strict as the OU or Star-K, more of like a triangle- K. If I am not mistaken, all of these restaurants that are under hashgacha and open on shabbos are vegetarian and owned by non-Jews.

So what’s the deal?

Is there anywhere that dictates a restaurant must be closed on shabbos? What about bakeries and establishments like Dunkin Donuts and Ben and Jerry’s?

Why is it that all of the best, healthiest and most fun restaurants to eat at in the city are under these fringe kasharus agencies? Caravan of Dreams is my absolute favorite, OZU, Buddha Bodai and a number of those Indian places around 26th and Lexington to name a few. 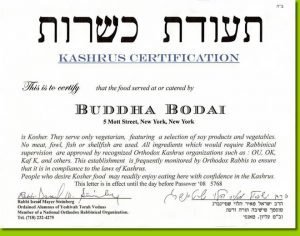 Is there any reason not to trust the hechsherim?Is there any reason to? Are all the people who patronize these establishments like myself, just lax in kasharus and going straight to hell? What about all the shit that goes down under the noses of major kasharus agencies?

After all most vegan places would probably be kosher if not for bishul akum (which only applies to food that cannot be eaten raw) and vinegar issues or wine issues.

57 comments for “What do you think of kosher restaurants that are open on shabbos?”