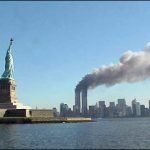 My father remembers where he was at the end of World War Two, the assassination of JFK and sort of remembers Woodstock (he was there but told me if you remember exactly what went on you weren’t actually there) As a 27 year old, I haven’t lived through that many major events that resonate in my life.

Sure I remember when Kurt Cobain killed himself, I was sitting on my buddies couch on shabbos morning and Kurt Loeder came on MTV News with the announcement and the whole house including me went nuts – I myself couldn’t care less – who the hell was Kurt Cobain anyway, but I wanted to be cool and know who he was so I could be cool too.

What else is there, Columbine, Oklahoma City Bombing, Princess Di’s death, there really aren’t many events I remember with such clarity because they really didn’t affect me much. Sure Columbine made inroads on my gun rights and OKC bombing made us scared of Ryder Trucks on our 8th grade class trip, and Princess Di made me wonder why on earth people were crying – but 9/11 was way different.

I was sitting in a Math Class in Monroe Community College and someone casually said that a plane had just hit the world trade center, 10 second pause and back to the rather boring lecture.

After class I walked on down the hall to where there was a TV and people were gathered around watching the news, it was right before the first tower fell and all was crazy, when the tower fell, it sent chills down my spine – then the state troopers came around and ordered the college to evacuate.

Little did I know but my dad was standing outside of a building he was working on in Manhattan watching the towers fall, I was kind of freaked out by the whole event and watching the news reporters choking back tears was really putting the whole event into perspective.

So like all patriots, I went mountain biking I remember distinctly thinking that our lives were about to change and that Nuclear War was only a few days a away, so I went mountain biking all day then hopped in my kayak too – the streets were empty – but I had to get outside before we were all shuffled underground away from the radiation.

I am sure tons of people thought bad things were coming, everyone went out and bought guns, the President convinced us that Iraq was going to blow us up with WMD’s and people actually cried – shit I balled my brains out and that’s before hearing about all the nissim that happened on that day.

I am sure everyone has their own stories, I don’t have any except that my first cousin Chavi who worked in one of the towers missed her first day of work in 30 years – pretty crazy huh…

← Yeshiva memories: Getting free catalogs in the mail
Charedim spread raspberry syrup on benches to prevent hanging out →