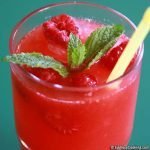 A new initiative put together by anonymous Mea Shearim residents is making the lives of youths there just a little bit harder, and stickier. Every week, just before Shabbat comes in, raspberry syrup is smeared on all public seating areas in the neighborhood.

I was wondering what would happen to all the excess syrup made of bug filled fruits, raspberries are infested with bugs, but since it was made kosher – it has a higher kedusha and therefore needs to be put to good use.

The campaign’s objective is to prevent young men and women from sitting on the benches and engaging in conversation.

Do you mean to tell me that young men and women actually sit together in broad daylight in Charedi neighborhoods that have residents known to attack women for dressing immodestly? Makes no sense to me…

The bench smearing takes place mainly in the busy section of Malchei Yisrael Street and Shabbat Square, where dozens of young men and women gather every Saturday, which has the Eda Haredit group and Geula neighborhood council outraged.

With Ner Jake gone it doesn’t seem likely, unless the more modern kids like to hang out in case there is a good riot taking place.

“These are defensive moves taken by extremist residents of the neighborhood, who don’t look favorably upon anything that takes place here,” said Itzik, a resident of the neighborhood. According to him, the new status quo prevents residents fro sitting outside on Shabbat. Nor do they have any way of wiping the raspberry syrup from the benches.

So I guess burning down your neighborhood because of a parking lot opening on shabbos wasn’t extremist??? What about those Gay Parade riots? Seemed pretty extremist to me…

“Furthermore, they operate inspectors on workdays who goad people to do their shopping quickly and prevent groups of young people from loitering in the streets,” he added.

Those who choose to compromise and sit on the steps instead of the benches also know no rest. In recent weeks, the syrup brigades have made sure to pour syrup on the steps leading up to Mercantile Discount Bank in Shabbat Square. Young people who chose to sit on the steps were met with an unpleasant and sticky surprise.

What about the Bleach Brigades? You know, the people that throw bleach on unsuspecting seminary girls for wearing red, denim skirts or logo sweatshirts? My rebetzins bais yaakov daughter was bleached for wearing an American Eagle sweatshirt!!!

Even I am not crazy enough to think of this…although there are some potential problems.

As I mentioned before raspberries have bugs in them, what if the youths decide to eat the stuff and it doesn’t have the proper hechsher?

Have they not thought about how hot the color red is?

Can you imagine if these loitering youths started licking raspberry syrup off of each other or made suggestive faces with fingers and raspberry syrup?

What about the fact many of these people may bring changes of clothing and change publicly?

Have they thought of the danger to regular old upstanding citizens?