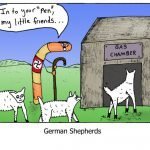 For most folks there is no connection between humor and the Holocaust, but it seems to be becoming more widely accepted. The Producers is hilarious and it came out in 1968 – only 23 years after the camps were liberated, but I have a feeling it didn’t sit well with many people.

After seeing Inglorious Bastards (the most overrated movie I have seen since Half Baked) this past Saturday night I wonder if people appreciate holocaust humor or are scratching their heads and wondering what on earth could be so funny about the death of 6 million innocent people?

Inglorious Bastards wasn’t that funny, I’m still nervous about laughing at holocaust jokes. But it did get me thinking about stuff, mostly about my not writing holocaust humor, I do push the limits of what goes for “orthodox Jewish humor” but for many reasons I can’t bring myself to write holocaust humor.

I have been told by several writers and comedians that I should, and I definitely could, but something just doesn’t feel right about it, like making fun of 9/11 or any other type of genocide. Seems like more historical events are funny, making fun of blood libels and oldschool anti-Semitic events is more accepted.

I guess I just don’t feel like crossing that line…

136 comments for “What do you think of Holocaust humor?”