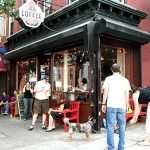 There are three kids sitting to the left of me, they are not talking to one another, they have not paid for overpriced chilled coffee flavored beverages with fat packing whip cream on top. They are dressed up as if they wanted to go out and then decided to come and hang out at the local independent coffee shop.

You know the type of place that has hardwood tables, worn thin by the scraping of notebooks, laptops and the spills of hot brown liquid on their surfaces. Usually frequented by deviant types with weird hair, weirder clothing and an ever changing array of musical tastes of bands you have never heard of, for if you mention that you have heard of them, or even note some sort of recognition these bands become resigned to the “sold out” bin of bands that made it, even if you are another deviant you cannot have heard of this band – funny because someone has to have heard of them.

Either way, I am sitting here drinking a short latte, marveling at the placebo effect created by my simple question of the tattooed barista that grudgingly admitted that the Muddy Cup of Albany, does not roast their own beans, if I recall correctly the Muddy Cup in New Paltz seems to have that “we roast our own beans” feel to it, not that it makes a difference to me, my friend had recently encouraged me to stop drinking that vanilla flavored bullshit in my coffee and drink it like a man, trying to develop my taste for coffee I feel the need to act cool and ask about beans and blends, even though you could give me a dark roast and I couldn’t tell the difference between that and espresso, wait are they the same?

So there are these kids and they are fucking annoying, already the kid who had been fooling around with his Tablet, had left annoyed at these kids who felt the need to show up at a coffee a shop and annoy the shit out of paying customers who came for the peace and quiet of a neighborhood coffee shop. I know it’s a free country, but cant they just sit outside and do the whole texting and laughing out loud thing. They aren’t even talking to each other, rather they are texting each other and annoying other patrons.

How on earth did Heshy Fried the anti technology anti indoors type of fellow wind up at an independent coffee shop on Saturday night anyway? Not too long ago I would be standing on my bike at the local indoor skatepark, chugging mountain dew and listening to punk rock while hanging out with my local skater punk brethren, suddenly I found myself going out to coffee houses, it was quite strange and I will tell you a secret, it all started when I needed to start figuring out inventive ways to pick up chicks.

Spot Coffee is in an old art deco Chevrolet dealership, it is a truly magnificent building, worth a quick jaunt through the city of Rochester just to feast your eyes what gentrification has the power to do. I would st in Spot for hours, just marveling at the coolness of independent coffee shop types. This wasn’t the Abercrombie crowd of starbucks, these people were different, unique, and those types of girls I always wanted to talk to at the record shops were here, though I could never muster up the courage, I would just casually glance their way, with the hope of a conversation struck up and a move to the upstairs love seat lounge.

Coffee shop fantasies with girls too cool and hip to notice me in my skater punk attire ordered things like Mocha with shots of espresso and chai with no foam and whip, while I resigned myself to Coconut Lattes and regular coffees drowned in sugar.

When I got a computer, the same one I am using today as I did in 2004 I became part of the messenger and laptop crowd, I was cool. I had convinced myself that to be cool I had to have a messenger bag; I didn’t realize until recently that the real coolness was in owning a Macbook, but that was way ahead of me at the time. I felt cool with my Toshiba and messenger bag, like now I could look like I wasn’t just some college kid. This was way before I even knew I could write, this was in those days of trying to pick up chicks online, it didn’t work, but it looked as if I was working.

I never actually did pick up a chick at a coffee shop, but the fantasy of some good loving in one of those dark tucked away corners where lovers converse over hot chocolate with a shot of espresso reigned, would I have a romantic conversation about the unique complexities of the way they roast beans and whether fair trade coffee is just another marketing tool or actually does mean something.

Although I never had a make out session on one of those cozy “found this in the garbage” couches, I have been in many cool coffee shops in my day and have met some cool folks. I have had some romantic coffee house conversations, and maybe a make out session or two, but never with a girl that I met in line ordering my skinny no foam latte. It was always with people I knew or were dating at the time; it just wasn’t what I wanted but I guess that’s life.

On a side note: I had a maple latte at Gorilla Coffee in Park Slope yesterday and it was amazing – real maple syrup, locally roasted beans and an unbelievable taste – Gorilla also has some of the best hipster watching in the city.

← What do you think of Holocaust humor?
Interesting posts from around the web →