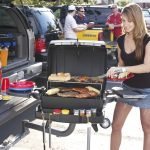 One of the leaders of the reform movement is trying to convince the board of halacha that tailgating is the best way to boost attendance at shul. We spoke with Rabbi Heather Freedman-Taylor over the phone after temple this past Shabbat and she was adamant about the lackluster attendance at her once packed shul.

“Nobody comes anymore and I just don’t know why” she spoke about losses to the conservative movement which she called a more “authentic” type of Jewish practice and to fringe movements like Renewal and Pluralistic Hippie Stuff. “Reform Judaism hasn’t been cool since the Haskalah, and I intend to change that.”

Tailgating is the practice of showing up early for an event and hanging out in the parking lot. Attendees tend to bring beer, barbeques and lawn chairs to the pre-game event. It tends to be rowdy, lewd and lots of fun – but does tailgating fit into the Jewish ideology. The big question is what does tailgating have to do with Tikkun Olam?

“Imagine if we encouraged a pre-davening tailgate?” People would definitely show up according to the Rabbi who has started sharing her idea with other Reform Rabbis. Who have had mixed feelings. One Rabbi from Oregon expressed his distaste with the idea of barbeques “after all this would mean innocent lives would be lost so that they could be enjoyed on the grill and this would be like supporting murderers and in Oregon they don’t support animal murderers. A Rabbi in Ohio said the idea was great except for the likelihood that alcohol would be served and that their temple was officially dry. We wanted to tell the Rabbi that one of the reasons why Saturday attendance at orthodox synagogues was so high was due to the free alcohol served.

Rabbi Heather related to us that her temple has a overwhelming number of football fans and the move may be tailored for her congregants, but that is no reason it couldn’t be tried in other congregations on a trial basis.

Since many of the more left wing members of the Reform Movement are anti meat eating and alcohol consumption, it is doubtful that the resolution to allow tailgating before and after Saturday morning temple will ever be passed.

← Gefilte fish made me frum
What do you think of Holocaust humor? →