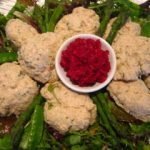 I started becoming religious about 3 years ago. It started when I went into a bookstore and picked up a book called “The Rebbe’s Army”. After reading that book, I couldn’t wait to get in touch with Chabad and start experiencing some of this stuff first hand. A few months passed, and I had met the local shaliach and started reading some selected works he recommended.

After a little bit of this getting my toes wet business (along with growing my beard and wearing tzitzis), I finally went to his Chabad house for Shabbos with a really hot date in tow. The Kabbalat Shabbat service was great; I had never seen such enthusiasm before. Then we all went upstairs for the Shabbos dinner.

First off, I must say, this dinner was AMAZING! Heshy would have probably had an aneurysm over this food. But there was one problem….. The platter of gefelte fish was right in front of my place setting. I hated gefelte fish. The southerner in me says, “if you don’t eat everything that is served to you, like it or not, then you’re a horrible sinner and deserve to die”, but I freaking despised gefelte fish. I wanted that platter of fish to be put on a train and never seen again I hated it so much. Yeah, I went there. I was the Hitler of gefelte. You could change the Megillah of Esther to replace Jews with gefelte fish and Haman with myself, and you would start to get the idea of how much I hated this craptastic excuse for food. I was at a complete loss as to what to do. Do I eat it and run the risk of barfing all over the table and my date’s new Shabbos dress, or do I refuse it and run the risk of hurting the rabbi’s wife’s feelings?

So, I decided to play a safe card to find out if you can politely refuse food at a Chabad Shabbos table. I looked at my date sitting across from me and said, “this is so much food, I can’t believe it. I don’t know if I’m going to have room to try it all!”

Her response was, “well you have to, you don’t want to hurt Chanala’s feelings do you?”

Damn it, now I was stuck eating this crap.

But, I thought to myself, this isn’t SO bad. It looks more like a baked meatloaf than fish. It isn’t the gefelte that looks like a bleached out turd covered in snot that no amount of chrain can fix. I can deal with it. I’ll just make sure I take the first piece so I can get the smallest one. Good plan right? I thought it was genius.

So we did the kiddish, and the washing and the challa, and everything else and now it was time to do or die. I knew that a minor social infraction at a Shabbos table would be forgiven without worry, but I was on a date with the hottest girl there, and I wanted more dates in the near future. I had no room for errors here. So, the challa is passed, and then the salad, and then I made my move. I grabbed the gefelte platter, jammed my fork into the tiny end piece that looked a little burned and handed the rest on down the line. After all the salads, fish, soup, and breads had been passed around, I reached for the chrain. Chrain could make this palatable enough to not pull a Linda Blair on everybody. At least I hoped so…..

Before I continue, I must explain why this is so ironic. I grew up in southern Louisiana on an army base where I enjoyed such delicacies as: snapping turtle, frog legs, rattlesnake, muskrat, possum, beaver, raccoon, alligator, and crawfish. Basically, if you could shoot it, we would eat it. And here I was acting like a 2 year old over some stupid fish.

Back to the story, that’s when my date said the worst thing ever. “Sam, take a bite without the chain. You’ll like it! The chrain ruins the flavorings that Chanala puts on it.”

So, first step, take this dinky piece of fish and pick off a small bite just to see what I was working with, and then scarf down the rest as quickly as possible. The first bite was absolutely amazing. This was nothing like the fish I’d eaten before. This was awesome. It had hints of tomato sauce, lemons, carrots, and a good texture. This wasn’t gefelte fish; this was meatloaf but made with fish. Where had this fish been all my life? Forget the hot date, I wanted to take this fish back to my place after dinner. I wanted to Shabbos walk with this fish until my feet bled. I loved this fish.

So I look over at the fish platter, a few pieces were left, so I jammed my fork into the biggest one and said “wow Chanala, this fish is amazing. How did you make it? I normally don’t care for fish so much.” Her response was a modest, “oh, I just put the fish loaf out to thaw, and then put a little bit of everything on it and bake it for a little bit and hope it comes out ok.”

So my next question was, “well what’s a little bit of everything? I can taste lemon and tomato, what else is on it?” Her reply, “oh just whatever….”

At that point Rabbi Avi piped up with , “Sam, a magician never reveals her secrets.” And with that, the whole conversation changed.

Now, years have passed. The hot girl has gone her own way. I’ve got a different (and better) hottie to take to Chabad of Chesterfield, and Chanala still wont give up her gefelte fish recipe. I’ve worked every angle I can think of. I’ve pestered, begged, offered money, everything. I even offered my fiancé’s super secret recipe for ‘slap yo momma chicken’ as a trade. Seriously, this chicken is Shauna’s Chabad gefelte fish. Most of you, and definitely Heshy, would slap anybody in the face to get to this chicken. But, once again, my efforts to get the recipe were thwarted.

So what gives? Why can’t I get this fantastic recipe? I think I might have figured it out though. As I typed this article for Heshy, four letters popped into my head.

A-I-S-H. That’s right. Aish HaTorah is just a few miles away from Chabad of Chesterfield, and I think Chanala wants to protect everybody by keeping this secret to herself. Plausible deniability, you know? This fish gives a huge advantage to whoever cooks it in the war for BTs. I mean, Aish HaTorah knows about this fish; it’s impossible that they don’t. If other Jews knew the secret recipie, there would be middle of the night kidnappings, water boardings, and possibly drive by bacon throwing. So, as much as I love this fish and want Shauna to make it for me every day for lunch, I guess I’ll just have to settle with having it on the occasions I am blessed enough to get invited to spend Shabbos with Rabbi Avi and his wonderful family.

You know how I called Shauna’s chicken “slap yo momma chicken”? Well, I’ve come up with a name for Chanala’s fish. “Peace in the middle east gefelte”. What do you guys think?

Oh, and one other thing. Gefelte fish isn’t free and Chanala works hard to make the best Shabbos dinners in west county St. Louis, so maybe you guys can check out their website and throw a bit of tzedaka their way. www.chabadofchesterfield.com

← Do you bribe your children?
Reform Rabbi thinks tailgating will boost temple attendance →

16 comments for “Gefilte fish made me frum”