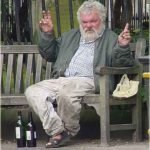 On Saturday morning in synagogues around the world, Kiddush club members celebrated the completion of a seven-and-a-half-month cycle of weekly drinking.

The celebration, called Siyum HaShots, was marked by the
downing of various whiskeys, bourbons, ryes, rums and brandies until every bottle was empty. “Shots in shul are a time-honored tradition,” said siyum organizer Ben Shikker. “We all know that wherever four Jews gather, there’s always a fifth.”

The siyum (Hebrew for conclusion) is held every seven-and-a-half months because it takes that long for the average kiddush club to polish off all its liquors and begin new bottles.

Shikker concedes that pressure is now being placed on synagogues to abolish their kiddush clubs and the Siyum HaShots. “It’s shameful,” said Shikker. “The OU is waging a whole campaign against us, called ‘Now You Siyum, Now You Don’t.’ But we won’t be intimidated.” Shikker asserts that being part of a kiddush club actually improves the fervency of one’s davening. “You can’t spell spirituality without spirits,” he noted.

He added that men who partake in a private kiddush during
the haftarah “shokkel more during Musaf.”

Some rabbis see it differently, however.

“They shuckel because they can’t stand straight after all that schnapps,” said Rabbi Nofun Ahloud. “Or even worse, they desperately need the bathroom.”

Despite the current protests, Shikker vows that shul kiddush clubs and the Siyum HaShots will continue. Furthermore, he advocates bringing the tradition into one’s home.

“When my wife asks me to buy her a dozen roses, I give her three bottles of Four Roses,” said Shikker. “I’m very proud of that.”