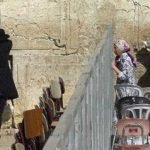 Modern Orthodox Rabbis have finally agreed to ban separate seating at weddings and other celebrations, Rabbi Josh Miller who heads the Union of Modern Orthodox Rabbis didn’t exactly come up with the resolution but was very for it, “it will unify the modern orthodox movement once and for all” he stated just after the press conference announcing the ban, “not only will it promote mingling between the sexes, it will also make events livelier and not feel so separate”.

Orthodox Jewish weddings used to have mixed seating but with the influx of what Rabbi Miller calls, Penguins and Oreos, into the community causing reverse gentrification and its 18th century morals on a society that seeks to progress within the boundaries of torah and Jewish law. First went the Young Israel dances, and all of the sudden you couldn’t even talk to your wife at your own wedding. Instead of enjoying their first moments as newlyweds together, they are whisked off into their separate sections only to see peaks of each other when they are put on chairs and can gaze over the barbed wire fence separating the party goers.

Many in the modern orthodox community have expressed alarm at anything separate. Fringe movements like the Keep Our Pools and Schools Coed Association have tried to take it one step further and require touching between the two sexes so as to provide definitive lines between modern orthodox youth movements and more religious movements posing as modern orthodox. KOPASCA has repeatedly mentioned that NCSY is merely a coed organization controlled by those who seek to separate the sexes at any chance they can get.

While board members at KOPASCA seemed satisfied with the ban, they still want to see more done to draw the lines between the “frummies and the MOdox” as Sue Fisher who founded the organization during a scrap booking event in her home. “I just saw my friends children coming home from yeshiva married with kids and they haven’t even discovered their wives existed outside the home, you should have seen how they talked to each other” Sue, founded the group after one of her daughters told her she would not be attending her sisters wedding because she doesn’t support events that may have mixed dancing at them. “If only I would have known, I would have never sent her to that single sex school of hers” Sue told us, practically crying at the thought of her daughter living in a place where people go to separate seating weddings on a nightly basis.

Apparently many of the more right wing modern orthodox organizations are against this ban due to constraints within their budgets. Although they all refused to comment, we have heard that due to the kosher food industries complications, many of these right wing modern organizations couldn’t express delight or disgust for fear of losing contracts. Rabbi Miller and Sue Fisher were able to confirm that the kosher food industry was running the show and that major organizations couldn’t care less as long as their constituents bought their triple washed, pre-checked under a magnifying glass lettuce.