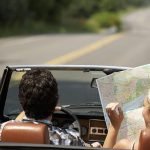 Having already taken off three weeks in the beginning of summer to go to Spain and Israel I didn’t even want to ask about taking off for and end of summer road trip which seems like it has become minhag to the Hesh. Traditionally at the end of August or beginning of September I hop in my car, usually alone or with one other half employed hippie type and run off to Montana for a couple weeks of mountain biking, hiking and micro brew drinking, while retelling close encounters with bears and mountain lions.

This year has been a weird one for road trips, having driven to and from Dallas 3 times, to New Mexico and Colorado once and now once a again a good drive was possible, but unlike those times when I was doing freelance blogging and Twitter spamming (social media) I actually have a real job, where I get paid a pretty good salary to sit and haggle all day long (you may have noticed I get to blog and tweet pretty actively Monday thru Thursday – while I work in inside sales) and being in a pretty shitty economy – I couldn’t resist the move to NY for the money, I didn’t want to mess things up.

So one day I found my boss in a pretty good mood and mentioned things about taking random days off and he immediately said that I could take unpaid vacation whenever I wanted for however long I wanted as long as I gave notice. Extreme hashgacha prutus one may call it, because I hate living in New York and sitting at a desk 8 hours day so much I had been debating moving to Berkley for some time to work as part time mashgiach, part time writer – for some time. I immediately asked for 2 weeks so I could wander around Maine and New Hampshire with a friend of mine who lived all around New England.

Normally I don’t like to use precious time off to wander in such close proximity, but this was a special case. I have driven everywhere besides for Alaska, at least twice, and have spent much time in my favorite states, but never in Maine, and having someone to split gas, do roadside cooking (my friend was a professional chef at two very noted NYC restaurants) and who had tons of friends we could stay by was too hard to pass up.

I have done past road trips in complete detail and this wont be the case, but some of you are obviously wondering if I blog or write full time and while I do, I don’t make any money from it, although I do get free stuff and loads of press passes. Anyway, here is a brief round up of my vacation.

Drove up to central Massachusetts to stay by friends buddy in Holyoke, wandered the area, which I have mostly visited due to its counterculture artsy/hippie vibe plethora of used record/cd/book shops and amazing coops. The hot college girls and great mountain biking aint bad either.

The next day we wandered around the area, went to some great swimming holes and made our way to Portland, where we stayed by my buddies college friend and wandered around Portland, I was there once but this time really got to see what its all about. Portland is amazing, love the old red brick buildings at the waterfront, the houses of Portland are amazing and the general vibe is somewhat casual. Oh and be sure to check out Arabaco for what may possibly be the best espresso on the east coast.
The next day we made our way up to the north country through some amazing rolling farmland and ate our way through raw corn on the cob, Maine wild blueberries and mutated farm stand tomatoes as we walked around some great old mill towns and windy roads on our way north to Baxter State Park where we planned to camp and hike Katahdin, the highest point in Maine.

Baxter State Park is a strange animal in which they only allow a certain number of cars per day and you have to get there at 5 in the morning to get in. We camped nearby, in a beautiful yet bug filled area of swamps, bogs and a hundred mile long swath of evergreen forest. Maine is the most heavily forested state in the nation with nearly 90% of its land covered in forest.

After a restless night and a very early morning rise we got on our way up Katahdin, which is famous for the knife edge trail which follows a narrow ridge from Pamola Peak to Katahdin and is 2 feet wide with 2,000 foot drops on either side.

Katahdin is insane, in fact having hiked and climbed various mountains all throughout the east and west, Katahdin easily beat out every climb as being the toughest and scariest. The 4,000 foot vertical is just half of it. Pamola peak is totally exposed, with hundreds of feet to go up without tree cover on precarious rocks, then when you reach the top, you must get to the knife edge, which requires some pretty tricky, nearly technical rock climbing up and down this huge notch. The knife edge was insane, I was grabbing on for dear life and it takes an hour and a half for even the fastest folks to complete the 1.1 miles trail. The views are great and we had weather on our side. 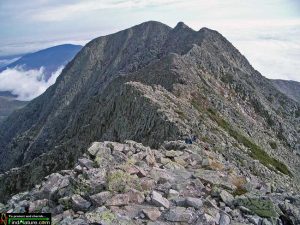 Katahdin killed me, I was aching for 3 days afterward, I was hurting more then the 21 mile full pack hike I pulled off in the middle of a 5 day hike in Glacier National Park in Montana. It ached more then the 17 mile day hike up Mt Marcy and Skylight and this was only an 11 mile hike, but I ran out of water (took 100oz) and the hike took us 10 hours. My friend, a Yogi, was not tired at all and complete exhilarated by the hike, and talking about chi and jing and all that yoga hippie stuff.

We spent the night in a hotel and I soaked in the hot tub. Next day we drove around about way to the coast and wandered about the various nooks and crannies of the area before getting shabbos meal supplies at the Belfast Coop – I mention this detail because the Belfast Coop is amazing, their local organically grown produce section is amazing and they have so much cool stuff there. I love coops, because they always have the coolest kosher stuff and randomness. You should see what my friend could do with a sauce pan, frying pan and one camp stove burner – its simply unbelievable. We would be spending shabbos at his friends girlfriends house in Hope which is down the road from the coastal resort town of Camden, Maine.

Hope, Maine is so back-country but not and it rules, hilly farmland punctuated by arts and crafts shacks and farm stands and beautiful old Victorian homes dot the landscape of endless fields, streams and lakes. We got to stay in a house built in 1810, which was full of some amazing books, and ball jars filled with freshly picked wild blueberries, it was quite joyous for me, the insane blueberry lover.

After a few days spent hiking, eating, skinny dipping and wandering around coastal Maine it was time to go do some more hard core hiking in New Hampshire. So on we drove around the North Woods of Maine and New Hampshire which are a kayakers and fishers paradise.

Northern New Hampshire offers the best and most hardcore hiking, backpacking and climbing anywhere in the east save for Katahdin, which is just one mountain. The White Mountains of New Hampshire have loads of huge cliff, crazy high waterfalls and alpine areas to satisfy even the most western hungry of you folks. It aint Colorado, but for being 300 miles from New York, one cannot complain.

We hiked, the Franconia Ridge to Mt Lafayette one day which I had hiked a while back on a long, wet and cold 75 mile hike of the area back in 2006, before I realized that my knees were killing because I hadn’t been using trekking poles. The ridge offers amazing views of the Presidential range, and the Bonds as well as a great place to walk above tree line and just below tree line in alpine and sub alpine forests. 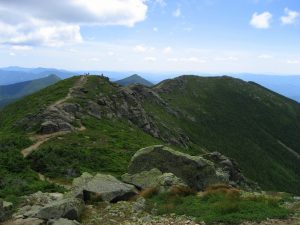 This was a general outline but there were many more hikes and wanderings. On the last day we went to Montpelier and meandered around central Vermont visiting some sugar houses, used book stores, farm stands and beautiful trails and eventually ended up for out last night back in Massachusetts and finally back to New York tomorrow. Of course I do have Friday off and will probably be dropping my buddy off and driving back up state to Albany for the weekend, as I normally do.

Will be back in the office on Monday and back to regular blogging once again.

Take a virtual road trip of your own. Visit Vegas via www.PartyCasino.com

24 comments for “Brief summary of my road trip to Maine”