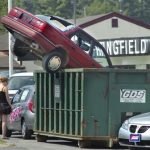 Forwarded to me by Rabbi Yossi

After successfully solving the banking, mortgage, automobile, and
housing crises, President Barack Obama has now turned his attention to solving the ultimate problem – The Shidduch Crisis. After much consultation with his close advisers, the president has unveiled his Kallahs for Clunkers program. With broad bipartisan support, and modeled after the successful Cash for Clunkers program, the deal offers any married man $4500 to leave his current wife and engage a girl of at least 22 years of age.

With this one bold act, thousands of young girls currently in crises mode will be taken off the market, making the even younger girls available for the just freezer-released Yeshiva bochurim. In addition, the anticipated surge of aufrufs, weddings, and sheva brochos that this initiative will cause, will hopefully jump start and stimulate the stagnant heimishe economy, with spending on simchah baskets, party planners, and other wasteful expenditures. President Obama has successfully resolved a crisis that many experts have spent so many years trying to solve proving true once again his slogan –

Obama: Exchange We Can Believe In!