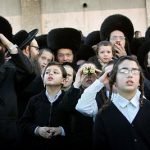 A man suffered minor head injures after a vertigo attack mid shuckel during shema, earlier today at Congregation Shaarei Tefilah in Monsey. One witness who wished to remain anonymous for shidduchim purposes (the shadchanim may say that him having looked at this man is proof he has no kavannah during davening) told Frum Satire News that he had seen the man grab his head in the middle of a violent sit down shuckel and suddenly he took a dive head first into his open shtender, “I helped him” but other worshipers were so engrossed in their davening that no one could do anything.

One man told us that people like that don’t belong in shul “nu, if you cant take the shuckeling go to a modern shul” and others said that he was known to be a recluse spending hours learning obscure topics like the Tur and Shmuel Aleph and Beis rather then diving into traditional topics like Mishna Brura and Gemara.

The shuls Rav who ignored us completely for fear of riots is reportedly working out a deportation deal for the young individual who was married but has just received a get from his wife citing that the shadchan never divulged to her that her future husband suffered from random vertigo attacks while shuckeling. “The shadchan never warned me this would happen” Rivky Weiss (maiden name) told reporters as she stormed out of shul and refused to even look at her slumped husband.

The story seems to have a happy ending as the shuckeler need not travel far to find a competent physical therapist since almost every frum girl in Monsey happens to have training in that specific field. One Rav told me that it may be hashgacha prutus that such a thing would occur during times of economic depravation, and that this would further support kollel wives and justify women’s education.

← Frum Satire now has a forum
My first Lubavitcher →