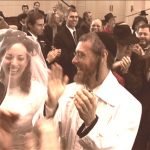 I personally love weddings, the food, the girls, the shtick, the dancing, the bloopers, but that’s mostly because I only attend weddings once every couple of months, my good friends are mostly lifelong bachelors – so only once in a while does someone actually get married.

Most of the frum folks I know, go to a wedding at least once a week, sometimes more and most of the folks I have spoken to view attending weddings as a chore – not something that is fun and exciting like it should be.

Couple this same old frum wedding complex with the fact that even a dirt cheap, “the food sucks and there’s a one man band and no alcohol” wedding will still run you 20 grand. For what? To gather a bunch of people you know in a big room to dance around in circles, seems like this could be done for way cheaper – but this is the traditional thing to do.

I almost got married and the whole time I was wondering how on earth my family or my fiance’s family was going to afford anything and we were looking at the cheapest hall in Williamsburg. To me it seemed like a big waste of money and time.

I spoke about this at the wedding I went to last night, and no I don’t have a solution – I do acknowledge that certain things have to happen, but do you really need to rent a hall and pay for shitty food in order to do this.

Even the really expensive weddings fade from many people’s memory after a few days. I know I am rambling along, but hopefully the girl I marry will see the foolishness in having a same old boring frum wedding.

I guess I just wish frum people would try and spice their weddings up – but my friend just told me that non-orthodox and non-Jewish weddings mostly suck as well and are all overpriced and only the ballsy folks ever do anything interesting to save money,

48 comments for “Frum weddings suck and are a ripoff”