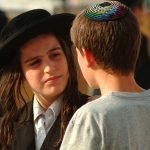 Thousands of Charedim gathered today to protest a new Hesder Yeshiva being build within the city limits of Bnei Brak. They burnt dumpsters filled with kipah srugas, colorful tichels, Rav Kook seforim and those artsy drawings of the ten sefirot that adorn the walls of many modern orthodox and freakish baal teshuiva Chassidim in Tzfat.

Things got ugly when several Charedi youths attempted to light a Judaica store on fire. The owner, a charedi who chooses to cater to the supposedly orthodox students of Bar Ilan University was reportedly selling blasphemous items like red havdalah candles, multi colored kipot and tzitzis with techeles which have been deemed immodest by many Charedi Rabonim.

A small counter protest by Chilonim who are willing to rally with their enemies because the only people they hate more then religious Zionists are Religious Anti-Zionists, gathered across the street and were protected by a large battalion of police women who were ready to remove their vests and expose their bare arms given the chance.

Rav Yankel, who is known to issues bans as fast as they can print them just shook his head and cited quotes from his original ban of kipah srugas and anyone that wore them or allowed people who wore them into their shuls. He told us that he didn’t even have to look at the teuda to see if something was kosher, he would just look at their yarmulke. However when I asked him about his thoughts on Suede yarmulkes he seemed evasive, all he could say was Pas Nisht.

I asked some of the youth who looked to be a little more modern (they didn’t look malnourished) what they thought of the protest and they told me that they were secretly removing untouched kipot from the inferno so that they could turn a quick profit by selling them to tourists on the steps down to the kotel.

Others had no idea what the protest was about and were just bored during second seder, one guy told us that his yeshiva ran out of coffee and he wound up in the melee trying to find some and decided he could get a workout by burning the kipot and running away from the water cannon that the police were shooting at them every now and then.

Not surprisingly there were no women at the riot and the children were the ones looting the stores so they could rid of this disguting Zionist agenda as they call it.