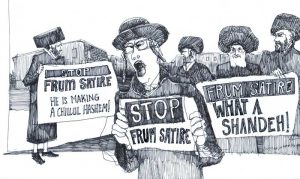 I met Elke Reva Sudin while spending shabbos in the East Village a few shabbosim ago, she told me she was an illustrator and naturally as a guy who grew up frum I had no idea what this actually was until a few days later I was tagged in a picture that was something random she drew when I was fooling around with my computer, all of the sudden it was a color picture and pretty cool and has been my Facebook picture for the last couple of weeks. 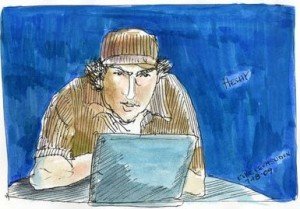 I then asked her to draw a picture of Chassidim protesting me, in a similar picture to the Niturei Karta protesting Israel. I like it and you all should check out her Website which features a series called Hipsters and Chassids, in which she went to Williamsburg and blended in, mostly due to her tznius look and did some way cool drawings including the one below which she calls Lee Ave. 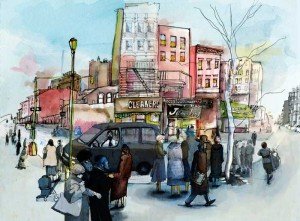