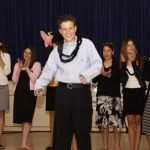 The closest I ever got to getting some at a Bar Mitzvah was when I locked hands with a girl during a hora once. For me Bar Mitzvahs were a time to stare at the girls across the room and watch as the class pimp went up to their class pimp and chatted, all of us knew we were hopeless, well hopeless until I actually did make it to first base when I was 14.

Jerusalem Post blogger Shmuel Rosner has a great piece on the subject and has an article in which he discusses Rabbi Eric Yoffie’s talk on the topic in which he states that these girls are trying to show their worth to these boys, which seems kind of hypocritical considering the radically feminist nature of the reform movement. For those of you who don’t know,  Rabbi Yoffie is the head of the Reform Movement.

Could this be another reason to join the reform  movement?