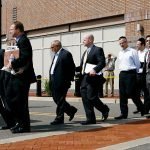 I am not shocked at all by the recent cases of business and money related fraud, its too bad I kind of expect this type of thing from the frum community, I am totally used to fraud, hearing about it and personally witnessing it, from the very frum to the not so frum money dealings are an all around shady thing in the frum community, and it doesn’t seem so bad until a bunch of people get caught at once and everyone goes up in arms about it.

I can count on one hand, all of the jobs I have ever done that I got paid on the books for, fact is in my circles if you get tax taken out of your paycheck you are probably working for someone who isn’t frum, or isn’t Jewish. When I mentioned that I was getting tax taken out of my paycheck when I worked in Monsey friends of mine expressed shock, and I expressed dismay because who the hell wants to pay tax?

How many businesses are exclusively cash, if I want to save on tax I pay cash. This is how it works when you get your car fixed, pay a locksmith or need a handyman. One of the beauties of kosher pizza stores is that unless they are official, none of them are, they rarely charge tax.

I of course have worked in several situations where I got to see fraud first hand. I worked for 3 summers in a row as a NY state summer camp inspector in which I audited summer camps that received government funding for their summer food programs. The Ctaskills has the largest concentration of programs period and while many other groups cheat the program, the Jews can do it on a large scale, surprisingly it was the more Litvishe groups that cheated and the Chassidim were more honest – probably because they are poorer and actually need the money.

While I did this job I can remember multiple times when people found out what I did, since I paid for food with a NY State credit card, they would regale to me their stories of cheating the government. It was always about how they never served lunch in our camp but when the inspectors came, everyone was told to sit down and shut up. We would have to count the children and they would get the kids top change clothing so they could be counted twice. Some of you are cringing, but in truth, these stories were hilarious.

I worked for a company once and they were paying me cash, my boss told me that if I wanted he could put me on the books for 26 weeks, fire me, I could collect unemployment and he would put me back on cash – I didn’t want to commit to 26 weeks.

I also worked in a position that was a volunteer position as mandated by New York State law, but we were paid on the books as janitors, lots of high paid janitors, and when the inspectors showed up we had to keep it cool and this was for a very “frum” organization.

On my first shabbos in Monsey I davened at a chassidish shul in the concord area that in the words of my hosts was so fancy because one of its prominent members had built it with insurance fraud money – he went to jail for it, but at least they got a really fancy marble filled shul out of it – the family seemed quite proud and I was actually a bit shocked.

Anyone who grew up frum, is involved in the frum community or has worked for frum people knows that the stereotypes are true. To me part of the problem lies in the fact that it doesn’t seem like such an un-frum thing to do, cheating the government is kosher, because we don’t use half of the programs and money dealings are behind closed doors, while issues like TV, internet or going to strip clubs which aren’t half as bad are out in the open.

I was taught countless times that the first thing they ask you when you get up to judgment prior to them showing the movie of all your life and the semen you wasted chasing you into gehenom, they ask you if you were honest in conducting your business dealings. Which is so funny because as I recall a bulk of the hashkafa and mussar given over by my Rebbeim was dedicated to honoring your parents, and the evils of the opposite sex – never was their talk of conducting your business dealings honestly.

My father drilled it into me and told me that damaging other peoples property, stealing and a slew of other things never taught in yeshiva were a disgrace and should be harsh punishments, like I remember my father being very supportive of Singapore when they flogged that kid for spray painting or something. I stole money from my dad when I was a kid to buy baseball cards and he gave me beating and told me if he ever caught me stealing from anyone – I wouldn’t forget the beating that definitely sunk in.

Just look at the reaction to the FBI sting in New Jersey, many frum people will say this: at least the money was going to tzedaka, or I know those people and they were so pious or ehrliche or frum and they couldn’t possibly do something like this – it must be anti-Semitic. If were supposed to look up to the Rabbis maybe kids think they should strive to be a bucky in fraud just like their rebbe.

When scamming the system is part of your daily life, its not so easy to change. Does anyone even want to change? Imagine if all of those people in Monsey and beyond who have shuls in their basement to save on property taxes stopped having those shuls? People would have to walk and they may lose weight, but that means they would be into their vanity and that can’t be good.

I wonder if all of the arrests of recent note will change anything, its been a pretty bad year for orthodox Jews and fraud. 3 high profile cases, Madoff, Kidney guys and Rubashkin combined with that couple in Monsey involved in welfare fraud, those two heimishe guys in Monsey caught stealing from mailboxes and a slew of other cases that seem to be on Vos Iz Neias every day.

Someone said I should offer solutions to the problems I pose and my solution to this would be to start preaching honesty in the yeshiva system, but the yeshivas themselves have shady dealings so its kind of goes against the grain. I am sure if they would drill into us this concept of honesty in business being the first question asked when you get up to the big kiddush in the sky.

56 comments for “Fraud in the frum community: My thoughts and experiences”