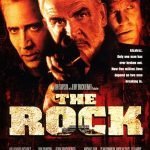 There are many yeshivish things, potato chips, cars and yarmulkes can all be yeshivish, but movies are never really thought of as yeshivish. Fact is that any yeshivish school worth its weight in shidduchim will throw you out and force you off the derech if you were caught going to a movie. If it was really yeshivish the hava mina to watch a movie may not even have occurred, but that doesn’t negate the fact that there are certain classic movies that all yeshiva guys love.

Please note that I attended yeshiva high school from 1996 until 2000 and this reflects the era prior to the $10 movie ticket and proliferation of DVD’s. This was the era of John Travolta action films and American Pie, and I wont name all the movies but there are several that come to mind.

The most yeshivish movie of all time is The Rock, even the sound track was one of those things that yeshivish people listened to. In my yeshiva the soundtrack for Glory and Braveheart were also especially liked, we were allowed to listen to instrumental music out loud.