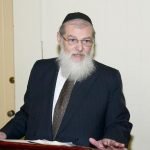 I don’t typically like speeches, hate may be a strong word, but I do space out or read something else. Tonight at the end of Maariv I picked up the Rav Shlomo Freifeld biography and couldn’t put it down, I half listened to Eicha while reading some amazing stuff about Rav Shlomo and wishing I could met him before he passed on.

Then came kinos, which I rarely say, but this time the only thing that forced me to realize it was kinos was some guy asking me if I was going to use my kinos book – “I assure you I wont use it” passed it along to him and got back into Rav Shlomo, it wasn’t until a man in a long black coat, gray beard and chassidishe up hat took the podium that I looked up, I looked up briefly and then got back into Rav Shlomo, but not for long.

Rarely does a speech like the one given by this man captivate me, especially by men who look liked he did. I am used to the speeches gray bearded, hat wearing men, the speeches filled with mussar and yeshivish terminology that I having gone to a non-yeshivish yeshiva cannot understand or use properly.

The first thing I noticed was his clear manner of speech and all of the history being given over. The sentence that caught my attention was when the man asked the audience a question. “How many of you can actually relate to Tisha B’av in the traditional sense?” He went on to say that no one could really relate, including himself, to the destruction of the two temples and all of the abstract ancient stuff, but there is another Tisha B’av we can relate to and that is of the Holocaust.

He went on to list a bunch of modern day events that started on Tisha B’av, including the start of World War One, The emptying of the Warsaw Ghetto in 1942, The Spanish Inquisition, The Massacre of the Jews in York England and the Bombing of the JCC in Buenos Aries in 1994 in which 90 people were killed and 300 injured. He used these points to explain that Tisha B’av is not just about destruction of ancient temples, but about the destruction of the Jewish people which has been going on since the beginning of time.

Not only did he speak clearly and not of the yeshivish tongue, but his speech was so much about history with quotes and books and general concepts that I was completely entranced. He talked about a book called “While America Slept” that was the first book to discuss in detail about Americas blind eye towards helping the victims of the Holocaust, he spoke of Winston Churchill’s lack of response even though he knew exactly where Auschwitz was and so on.

He spoke of a town in Poland that burned all but 12 of the towns Jews inside a barn after Poland was conquered by the Germans. He spoke about Abarbanels willingness to lead thousands of Jews out of Spain during the inquisition.

He also spoke of the modern day events and painted a chilling scenario, he said that he was in tune to all of the recent anti-Semitism coming out of the Blog-World concerning the recent scandals involving Jews, first Madoff and now the current ongoing FBI sting operation. He then said that if Israel were to attack Iran and in turn cut off gas supplies, the Jews would be blamed, because it seems true and they are an easy target. He framed this with the fact that up until 50 years ago Jews weren’t welcome in most places, including hotels, law firms and financial houses, hence the reason there were brokerage houses like Lehman Brothers and Smith Barney.

At the end of the speech I asked who the guy was and was told that his name was Rabbi Nosson Scherman and that he is chief editor of Artscroll.

This took place at Rabbi Groeners shteible in Far Rockaway and yes I had some funny observations but Tisha B’av is no laughing matter – expect a post after the event – and have an easy meaningful fast.

15 comments for “Rarely am I so captivated by a speech”