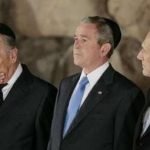 I found this post on Material Maidels blog about two guys she and her friend went to a club with that removed their yarmulkes when they walked into the bar. I am one of the only people I know that wears my yarmulke everywhere , mostly because I am proud to be Jewish and feel more likely to represent my Jewishness if I have it on.

Do you think people should remove their yarmulkes to go into a bar? It kind of irks me, but that’s just me the proud Jew.

← Picture of the day: Are you a super Doosh?
Six reasons why frum people aren’t friendly →