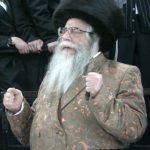 Yesterday on Twitter @noahroth created a new hash tag called #myrebbessoshtark and asked me to play along. For all of you who are missing out on what may possibly be the most fun online program since AOL Jewish chat, Twitter hash tags can be entered into any phrase to tag it and tons of people play along. Hash tags are click able so you can see what everyone else is saying about that item.

Maybe this will convince all you Twitter haters to join because it is super fun, its just harder to figure out than Facebook and hence people are scared and say that all Twitter is for, is sharing what you had for breakfast – Twitter users know its anything but that…


noahroth @SimonSynett #myrebbessoshtark He told me to celebrate my aliyahniversary w/ a seudat Hodaya of meat & wine during the 9 days. (True story)

noahroth RT @bukin86: #myrebbessoshtark My rebbe is so shtark Hashem needs to work on his yiras my rebbe // And the winner & New Champion!

bradsugar #myrebbessoshtark that most tehillim are written by him, for him, or about him.

makeforyourself #myrebbessoshtark he would not allow me to be his chassid

MarkSoFla #myrebbessoshtark When he’s still before borchu and it’s sof zman k”s,he makes an incantation from kabbalah to stop the earth moving!

e_fink #myrebbessoshtark he lives underwater so he never has to get out of the mikvah.

patina626 #myrebbessoshtark he did hagbah after he was nifter

jewlikeme #myrebbessoshtark he removed all the seatbelts from his car, so his daughters and wife couldn’t use them

← RE: Jewish themes in Michael Jackson songs
Picture of the day: Are you a super Doosh? →

16 comments for “My Rebbes So Shtark That…”