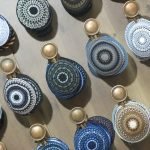 Someone told me that its something I have never written about, but when you think of it the yarmulke is a pretty dirty article of clothing that rarely gets washed. It sits on your head all the time through sweat and dirt and the only time it washed is when it falls in the toilet, that is if you decide to use it again.

Now that we are on the discussion of non-washed Jewish items, I have never washed a pair of tzitzis, I know the whole deal, but I just get a new pair after a couple of months – pretty sick now that I think of it – but how many people actually wash their tzitzis? What about talesim, they do look awfully brown and weathered most of the time. Besides of your tzitzis are too clean people suspect you of never wearing them.

Tefillin cant be washed or cleaned as far as I know which means you have years of dirt piled up on your tefillin straps. Further more you have no option of being clean since you cannot put them on right after you took a shower. Look at anyone’s tefillin straps, you can scrape the dirt off and its gross.

I know its not clothing, but one of the most disgusting items in a Jewish home is the washing cup, I have laughed at the Facebook made event called “national wash your netilas yedayim cup week” but the founder does have a point – its pretty darn gross, considering that most people who wash don’t use soap and had just come from the bathroom.

When it comes down to it there are tons of items which should be cleaned but aren’t. Gemeras, shtenders, yads, mayim achronim gear – I wonder if there is anything else?

← I’m Moving up in the world
Britney Spears is converting to Judaism – who cares? →

38 comments for “Do people wash their yarmulkes?”