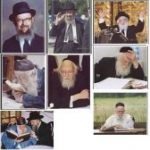 Every week the Jewish newspaper Yated has a Rebbe centerfolds section, with pictures of Rebbes doing everything from cutting a birthday cake, drinking mayim chayim seltzer and walking to their cars after a wedding – which was always of the son of some other Rebbe. These Rebbe rockstars even have collectible cards and you can buy their pictures to hang on your wall, I have not seen anyone wearing Rebbe tour shirts but I am sure that’s coming soon.

I have always wondered if the Rebbes featured in these pictures had a problem with the frum paperazzi or liked the attention given to them, do they get in the Yated just by having a good publicist (in the frum world of rock star rebbes they call their publicist a secretary) but I know its just the publicist and PR person who makes you wait on line to get yichidus (which in the non-Jewish world is known as asking for their autograph.)

What about product placement and rockstar rebbes? Seriously do you know how much money Mayim Chaim, Be’er Mayim have to pay to be in those pictures of rebbes in newspapers. Imagine a commercial with a Rav Nosson Zvi Finkel wiping his brow in front of the Mir, and drinking Mayim Chaim seltzer? It could be something like a sprite commercial – “Image is nothing, learning a blat is everything” obey your thirst.

Don’t even get me started on Kupat Ha’ir, the king of product placement with Rockstar Rebbes, their ads are all based on some big Rebbe in Israel putting a couple bucks into a pushka with their name on it.

The funny thing about some Rebbes is the height of their rockstar status, I mean imagine if Jerry Seinfeld went to Brooklyn from Manhattan, no one would blink an eye – but if the Viznitzer Rebbe travels from Monsey to New York it makes headline news (well if you count Yeshiva World News as headline) and they have pictures and quotes from their speeches and all that stuff you really don’t care about unless your into frum celebrities.

Sometimes I wish I could be one of those people that can walk into a frummie house and pick out the Rebbe Rock stars on the wall, but I can’t. The only Rebbes I can pick out are the Lubavitcher Rebbe, Akter Rebbe (the most bad ass rebbe of them all) Rav Moshe, Rav Pam and Paysach Krohn (who isn’t really a Rebbe) I never know those obscure ones and I wouldn’t know Rav Ahron if he was raised from the dead and sitting next to me in shul, shit I would be the douche that wouldn’t get up when some white bearded gadol demanded his makom kavua, while all the fans stared in horror as I dissed some gadol because I wanted the end seat (ever notice that makov kavuas are always the seats with armrests? paparazzi

Seems to me like the equivalent of one of those movie awards things is the Siyum HaShas – when all the Rockstar Rebbes show up and the screaming fans pay top dollar to hear them do their thing. Rallies seem similar to when celebrities go to protests and that sort of thing

I have only been to one Rockstar Rebbe for a bracha, when I was a kid my father would take us to the Skevere Rebbe in New Square for brachas, and one time we went to the Toshe Rebbe in Montreal, but he couldn’t see us, and some kids were talking bad behind our backs in Yiddish, but no matter what I said my father wouldn’t school them and said he understood everything they said.

Rebbe stuff I have been waiting for:

← Horror Date: Just because I’m not frum doesn’t mean I’m a whore
I’m Moving up in the world →

21 comments for “Rockstar Rebbes and the frum paparazzi”