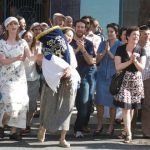 I think the last time I put on something that I would have called shabbos shorts was in the mid 1980’s, you know, those dark shorts that covered your knees that you wore to shabbos parties that gave out pekalechs filled with button candies and fizzer pops?

Well even if you didn’t have those experiences, I did, and I was wearing longer then my knees-shorts and a button down shirt for my first pre-shul shul. That isn’t a typo this was similar to the college party pre-game which starts in your dorm room, in shul mode.

We walked down 1st avenue in the east village towards pre-shul, we were headed to an Egal (egalitarian for all your right wingers) minyan for the cultural experience of it, that alone is enough to get those frummies with pitchforks and lanterns banging on my door in the middle of the night, what’s more is that for the first time in my life I sat in on a minyan that was saying lecha dodi and my phone was vibrating.

I walked in and stuffed my hat in my pocket and grabbed the most “I have no idea what I’m doing here” yarmulke and sat down, I didn’t want to be outed as an infiltrator, I wanted to appear legit, so I kept pretending to look at my neighbor for the page number, and every few minutes my yarmulke would fall off my head and I would take a little longer than a regular frummie to realize this. Us frum folks know when the yarmulke falls off, but I have noticed that the unaffiliated and non-regular yarmulke wearers will go for about 30 seconds before their neighbor will grab their yarmulke from the floor behind them and hand it to them.

Clad in shorts and a pink silky yarmulke I davened mincha and tried not to shuckel, I also tried to bust out those BBYO “I have never davened before” modiim bows, you know the whole knees bent and then bow which is never done in frum circles, I was sure some people could tell we were there as spectators, just as I could tell the guy sitting next to my friend was also religious – well not that religious obviously – because anyone going anywhere for the cultural value of it cant really be religious, right?

So back to this other religious infiltrator, I could tell he was religious based on several things, besides for the fact he was wearing a yarmulke in the correct, not too far behind the head position, he knew how to perfectly place his finger in the siddur as a bookmark. He also sang along with kabalas shabbos by heart, while everyone else including myself who didn’t wantr to be mekabel shabbos at that time – hummed and did our oy oy oys.

Then there was this girl with flaming orange hair and a bright teal outfit that matched her sandals of all things who was doing the sit down shuckel right next to me, as many of you know, the sit down shuckel is complex and not traditionally done by anyone besides FFB’s which led me to believe the girl in teal was in fact another one of the frum infiltrators present in this Egal minyan, shit we probably could have had a kosher break away minyan, separate seating and all.

The place was a big mix, the Rabbi was like one of those super friendly NCSY advisers who went to YCT and became an overzealous Rabbi, he had this perfectly groomed modern orthodox flair, knit yarmulke of perfect geometric proportions and a blue shirt, sport coat and khakis, he screamed Connecticut upper middle class and told us that Ian would be leading kabalas shabbos as they started yedid nefesh.

We were sitting on wooden chairs men and women together, but there was no microphone, they didn’t need one but I always figured non-observant people did things to spite orthodoxy, you know that’s kind of how its taught in yeshiva, so I was expecting everyone to be davening through a microphone and eating ham and cheese while they talked on their cell phones about after shul movie plans, well besides for mixed seating, and a siddur that took out the morning bracha of shelo asony ish and replaced it with made me a Jew so as not to be too apolitically correct, nothing was really wrong.

Well yedid nefesh was sang from a feminist point of view, but Ian a supposed mail chazzan was going to lead kabalas shabbos, so I didn’t have to hear kol isha. Well after an aleinu which leads me to believe that non-affiliated Jews all bow exactly the same way with the knee intensive bow, and would have no idea when to bow if not for the chief bower at the front, we started kabalas shabbos, or Shabbat as they claimed it was called.

I should also note that everyone ended shemona esrei at the same time, kind of like when I was in high school and we would look around to see how many people were done and then sit down. But this was a more en masse ending, like the Rabbi sat down so we could sit down. Another thing interesting was that it was completely silent, like not a peep, which drives people like me nuts, I need constant stimulation regardless of whether is has to do with yehash shmei rabba or overhearing some woman talking about her estrogen supplements.

During yedid nefesh I looked through the siddur and tried to find stuff that was changed or taken out, nothing besides the brachas, but I did find all of these nationalistic songs like America the beautiful and the star spangled banner, or and Oh Canada – WTF??? The sim shalom siddur is also the first siddur I have ever seen to have a bibliography which was really interesting because they talk about who wrote this and that and when.

Not one person was wearing a tallis, I was kind of surprised, I mean based on my “unaffiliated kids at campus chabad and hillel” wearing tallis on Friday night experience I would have expected everyone to be wearing tallis scarves, but they weren’t and only 2 women were spotted wearing a yarmulke, until I realized that Ian might actually be a woman – which I kept to myself until…

The kids in front of me turned around and asked me about the chazzan, they said Ian was going to lead services, but Ian was a woman, what was up – I told these kids that this was the east village and anything goes in the east village.

Then for lecha dodi the rabbi said something about how we sing the tishga baav tune for lecha dodi, which was odd because tisha baav isn’t for another two weeks, but I love the eicha tune so I was kind of happy until I realized it was some happy go lucky, I have no idea what tisha baav is tune.

I was kind of sad to leave because I had grown fond of my pink silk yarmulke which would be a great way to get aliyos at frum shuls which would never give just a regular modern looking guy one. Just like black velvet changes your status in a lot of places, having a 1950’s bat mitzvah yarmulke of someone named Gertrude will also change yours.

I am still wondering the same thing that your wondering what on earth is the difference between Egal, conservative and Reform?

Oh and technically speaking for all you sticklers out there who bashed me when I wrote about the reform minyan I went to, this as was the case in that post took place in the basement of the shul, in their day care center.