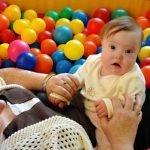 I have to tell you the truth, when my meal partner from Ascent in Tzfat told me that the people we were eating at had a bunch of children with disabilities I wanted to change meals, I wasn’t in the mood of some awkward meal with special needs kids screaming in my ear and coughing up their medications on me, no thank you. Then he had to tell me that the food wasn’t too great either, man was I pissed.

The father of the house dropped by Ascent to pick us up, and we added two extra people to the meal. In Israel everything is beautiful according to some people, but I try to keep my cynical side on at all times, trying to break the hippie craziness that permeates everything.

We walked down the hill, when we passed the Ari Mikvah I started to get worried, I sure as hell hoped we weren’t going all the way down the hill. My shirt was sticking to my back and I listened with half an ear while the host told us about all the kivarim (burial grounds) of toadyism in the area. I never could get into it at burial grounds, it may be the crowds, or it may just be that we aren’t really sure if anyone is buried there and we may just be praying to a slippery marble floor. To me, praying at a grave requires some cave where people die if they walk too close.

We walked down and down and kept going until we finally made it to level ground, we were halfway to the valley floor by the time we got to the place we would be eating. Let me remind you all, that I had this vision in my mind of terrible food and kids throwing up on me, so the long walk wasn’t helping.

Suddenly 3 kids appeared in the street and ran up to hug their father who was walking us down the block, they were retards all right, but they weren’t coughing up blood or medicinal residue. We got into the house, which was super small and could see that there was no room for all of us, it kind of reminded me of my times going to the Machlis house, which was totally because of the girl factor. I was uber pissed at Ascent for giving us eye candy and then separating us for the meals, isn’t Lubavitch kiruv all about the women anyway? I always felt that Lubavitchers invited all the Jewish hotties into the fold so they could attract more people, kind of like Abercrombie and its hiring process.

The table was set and the chairs ranged from piano benches and stools to something that looked like a kids shtender. Then they started stacking the challah tray with tons of challah and worst fears were coming true right before my eyes. You see folks, in Israel poor people have something called the challah course, they have one big vat of humus or Mabucha and tons of challah, then they usually serve some dark meat chicken and half way through the chicken you realize that the kids aren’t eating anything because the guests got the good food. Nothing spells awkward like a bunch of special needs children, not enough room for the guests and one big challah course, I started to panic.

My fears went into code red when a Yemenite woman from down the hall brought more bread over, but they were soon gone as they started serving the drinks, if there was only going to be challah, there would only be water too, but that wouldn’t be the case. No sooner than the drinks came out, did multiple salads, and a bowl of very good soup appear. Suddenly I was happy, albeit a little curious what the story with the hodgepodge assortment of disabled children sitting around the table.

We didn’t have to wait long to hear what I can only describe as a gut wrenching story which made me want to run into the bathroom and cry my brains out and then ask for teshuva for thinking all of my selfish evil food thoughts as I was walking down the hill and regretting every step.

All of the children besides for one are adopted, 7 children in a tiny apartment, I noticed that two kids sleep in the living room. The hostess told us all about the sad fact that in Israel many people, including Charedim would leave their disabled children in the hospital and many of them would wind up in institutions. She told us of her organization which has a database of families who want to take children who are left in the hospital. She told us of the sad fact that Charedim are told by their Rabbis more often then not that they should leave the child in the hospital because its too hard to raise so many children as it is, she showed a lot of disdain when talking about her fellow Charedi families that had so little compassion for their own children.

It seems that their poverty is voluntary, as while they lived in Alaska they were working steady jobs, now the host learns in yeshiva while I am not sure what the wife does. Whatever it is, I was completely changed from one meal, she told us that giving birth to a child with down syndrome was the greatest blessing for their family that could ever happen and the women she has convinced to take their child home have all come back and told her that bringing a child with disabilities into their home changed their lives and helped their marriages like nothing else before.

I wonder what would happen if these people actually believed that disabled people are on a much higher madreiga than us mere mortals they may change their minds.

I was seriously crying inside during the entire meal, I didn’t get thrown up on and I learned some valuable lessons.

I have no idea what I would do if my future wife gave birth to a child with disabilities, but the thought of leaving my child in the hospital has never occurred to me, I have heard of other cases like this in the states. Rabbi Bomzer who is the Rav Hamchshir and Chaplain in Albany, NY told me that he visits with Chassidic children in the hospitals and institutes in the area because many families need to hide their children so the “normal” one’s can get a shidduch – its all about the shidduchim eh?

By the end of the meal I and I am sure my fellow Ascent meal-mates felt that we were in the presence of some very holy people, I kind of wanted to ask the host for a bracha, but was too embarrased to.