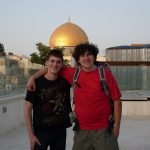 I landed in Israel and just told the sharoot guy to let me off at the shuk, I had rugalechs and shawarma on my mind, I hadn’t eaten a real meal save for the airplane food in 3 days and it was time to pig out. I turned on my phone and realized that my brother had left an Italian SIM card in the thing instead of an Israeli one, and so the cell number I plastered all over my Facebook account was false and I had no way to reach anyone so I could find a place to stay for the night.

For the first time in my life I was not sick from the flight, mostly because it wasn’t the all out 11 hour ordeal and I wasn’t jet lagged at all. I usually get off the plane with a huge headache and need to find a bed immediately, on ly to hop on a sharoot and get nauseous from the Israeli driving and windy roads.

I ordered a shawarma, got me a bag of my most favorite rugalech in the world, from a stand in the center of the open shuk and headed to town, I figured the best way to find someone to sleep by was to meet random people I knew in the street. I didn’t meet anyone I knew until I got to the old city, I was sitting near the stairs down to the kotel watching the throngs of beautiful Israeli women and tours pass by while trying to communicate my shabbos plans via Facebook when this guy I had lunch with in Baltimore two hoboism ago sat down next to me to mooch off of the open network. Israel has the most free wifi networks I have ever seen, and you can see folks with laptops sitting in the mpost random of places mooching off of them.

We chatted I used his phone and got in touch with an old friend who is known as Nigga-Joe, he gave me some directions to meet him at his kollel in Mea Shearim at 1 in the morning near the big shteeble there, I had no idea that shteebles were allowed to bigger than a garage or finished basement, I figured the size may be against official shteeble regulation.

I asked my buddy Nigga-Joe to read me some of the pashkevilim plastered around the ghetto, pashkevilim are those ugly posted signs in bold Hebrew proclaiming riots, and other exciting happenings in Charedi communities. I didn’t want to miss any good dumpster burning parties and a chance at some good old Charedi violence. One of them mentioned that this coming shabbos would be another protest against the parking lot being opened on shabbos and I got all excited of course, we also found one that stated a rally against the gay pride parade the next day at Kikar Shabbat, man was I pumped.

The next day I found myself back in the shuk, this time sampling free halvah samples and buying some artery clogging baklava and wandering around looking at all the crazies, I was just thinking to myself that I should do a little video tour of the place on erev shabbos when I heard my name being called from down the way, I turned to find some ragged settler looking fellow who asked me repeatedly why I didn’t remember him. Then he admitted to being a fellow blogger whom I never actually met unless you count Facebook, Yaakov Ben-Yehuda and I sat down for a drink at some side restaurant in the shuk and got into a several hour long conversation.

While looking on Facebook the night before I had found out about some roof party in Nachlaot, it said bring your friends and since it was on my friends wall, I figured I would just show up and know some people there anyway. I also found out it was my friend Ittas sister running the show. So I had plans for the night and figured I would figure out shabbos plans then. I walked quickly up to kikar Shabbat for the Anti-Gay Pride Parade protest, I was excited, but kind of scared that my short shorts, sandals and bright red shirt would get me into trouble.

I arrived to find a hand full of chassidim standing in front of a stage with signs that probably said something about all non-believers going to hell. Someone came by with a 6 pack of free water and cups and everyone went to town, the water was warm, but still, free is free. I got to talking with these two yeshivish dudes from the Mir, and they were also looking forward to some real rioting but had heard this was going to be a peaceful protest, which explained why no one was there.

They started saying tehillim, so I figured it was a good chance to say some tehillim, very passionate tehillim might I add. The crowd never did fill up but there was some kid selling sack cloth, and I wondered why this four cornered garment didn’t need fringes at the end? My buddy mike and his Italian buddy from Hebrew U Showed up and I told them we better bust out and hit up the Pride Parade, because this protest sucked, they reluctantly agreed, in America they would have looked like a gay couple, in Israel they looked normal. When we got to Independence park the cops didn’t want to let us in because we were wearing yarmulkes. The Italian guy asked the cops if they Gsays had no yarumlke wearing supporters.

Either way the pride parade was really gay, and not in the good way, it basically sucked and it didn’t seem like there many gays there, it seemed like it was more of a support festival then a bunch of crazy queers dancing to George Clinton like I had expected, Gay Parades are supposed to be fun but this one blew – no pun intended.

So we went down to the old city for some good old fashioned praying, walked through the Christian and Arab quarters to check out this old shul and then I walked up to the shuk to go hit up this party. I bought some 1 kilo of cherry tomatoes for 11 shekel because the guy didn’t want to sell me 3 shekels worth, my Hebrew is good enough for basic conversation, to get around and to pretend like I speak Hebrew. I also bought a laffa with zatar and ate while I figured out where the party was, it was right at the beginning of the closed shul up a bunch of stairs to a roof, I explained to the hostess how I found out about it and like expected she seemed pretty excited that OI randomly showed up. I went up to the roof to find some food, wine and bunch of Australians talking about how much money they saved on their car insurance.

Random people started coming and I got into a long conversation about being an artist in the frum community with the lead singer of Blue Fringe. I then figured out two things, #1 that it was the third anniversary of my blog and #2 that this party I was at was for gimmel tammuz and was celebrating the Lubavitcher Rebbe’s yertzeit and in turn everyone was making fun of the Yechi crowd.

I never really understood the whole gimmel tammuz thing, does that mean the people who think he still takes part in fabrengins at 770 celebrate gimmel tammuz? How could they, doesn’t that acknowledge that he died? Oh and while I’m oin the whole topic, what’s with the Yechi crowd singing “we want moshiach now?” If he’s here already why should we want him now?

I met some cool peeps, met some old friends and had a gay old time (not like the parade) then my buddy Josh who made me feel honored by saying he reads my blog (most old friends of mine have either never looked at my blog or read it only before I come visit) I really don’t feel insulted if people don’t read it, heck, I don’t read anyone else’s blog. A crowd of us left at about 1am for another party with real hippies, which was boring but I got on the internet to pay some credit card bills and then called it a night.

I think one of the joys of Israel is Jewish Geography, but its different then the US, its not in place of conversation because you have nothing to talk about, its more like, a random name is mentioned and then all of the sudden someone says, hey I know that cat – how do you know him, and that’s the concept of flowing Jewish Geography.

← My trip to Madrid
Burning dumpsters doesn’t show the beauty of shabbos! →

54 comments for “My first two days in Israel”