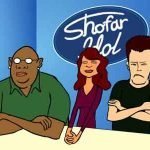 Reprinted with permission from Dara Lehon

Relationships blow. Or are they a blast?

For years, my inbox has overflowed with canned images of shofars, drizzling honey and tasty-looking apples. And each year, I send emails wishing others a Happy New Year, and think about how lucky I am. Rosh Hashana is indeed about celebration, rebirth and all that malarkey.

But if you”re like many people who are dead set on finding the perfect mate (and who have not yet necessarily been successful), you”ve probably spent one too many Rosh Hashanot sitting in shul contemplating your dating fate — and not only about whether or not you will be written into the book of lifelong mates, or left in the dust. You’ve probably contemplated how many of your friends have gotten paired off over the last year. And why you haven’t.

And while hearing the shofar blow 90 times is one of the major mitzvot of the holiday, seeing all of the newly paired faces, you’ve probably thought: “I want to blow this joint like it were a shofar.”

Still, obligingly, you find yourself on the edge of your pew waiting for the granddaddy of all blasts, the Tekiah Gedolah. The longest-lasting most exciting toot you’ll hear all year, and the symbol that shul is almost over.

And as you watch the tokeh lick his lips and adjust to sound the shofar, it”s hard not to let the mind wander.

And, shoot, you realize, there have been a lot of broken relationships.

Now knowing that a new year is full of opportunities, you’re excited about the apples and honey and all the round things you will eat in anticipation of that sweetness. And even if you’re afraid that this will be another year of dating the same kind of person who hasn”t been “the one,” or that a sour apple will emerge from beneath the honey, maybe, all the relationships that kinda blew in the past are all leading up to the one, the big blast: the gedolah.

Tekiah: The longish relationship and a sort of a somber blow, maybe a little serious, maybe too serious, it tried to get going, but it knew there was an end. Phew.

Shevarim- Teruah: Three. Great. Dates. Following by several long months of flirting and attempts at a relationship. That failed.

Tekiah: After reconsidering the Shevarim-Teruah months, tekiah seemed to be the appropriate move. But it ran out of steam. And sadly, did not work out.

Tekiah: Luckily, another tekiah became available. Yes, it may have been a rebound tekiah. But it was there.

Shevarim: This was a blast for three months. But you realized that it wouldn”t make it to the gedolah.

Tekiah: Ok. You decided to commit to yourself for the long-haul. After all, if you don’t love you, who will?

Tekiah: Yep. Still committed to yourself…now just waiting for someone else to…

Teruah: Enough of that self-love stuff. You date for weeks or months, with maybe a few bobbles along the way. And maybe, just maybe, you end up with one of your tekiot.

Tekiah Gedolah,: The big finale. Sure, you’ll get red in the face, feel like you can’t catch your breath and like your head will explode, but you’ve been waiting for this for a long time. You inhale deeply and go with it.

This Rosh Hashana, when one too many mothers suggests in the lobby of the shul that you and “Avi,” who”s really grown into a lovely boy, should go for a malted at the drive in, or when you realize that one too many of your former crushes has gone bald, and when you notice that “even she” has a ring on her finger—but not you—remember: Sure as the shofar blows, sometimes the romantic blasts don”t happen on the first shot. And sometime the blasts don’t last that long.

Just relax, inhale, and keep trying. Even if it takes 90 toots until you get there.