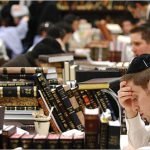 The sit down shuckel is kind of like wearing a hat, in that it takes commitment. I myself have never felt the need nor had the guts to rock the sit down shuckel, mostly because shuckling for me has always been due to leg cramps and the feeling that I am going to fall asleep standing up, in other words shuckling keeps me on my toes, no I never spoke about this before.

For the small segment of the population who does the sit down shuckel, mainly comprised of fresh off the boat Baalei Teshuva, very yeshivish people and modern orthodox kids during their first two weeks home from Israel, there are several different types of sit down shuckels.

Table Push off: The table push off takes the pressure off the abdomen and allows for easy sit down shuckels, common issues arise when you are into something real good and need a faster paced shuckel. The table push allows for a very methodical shuckel, and is commonly done while looking into the distance and not actually concentrating on the task at hand.

Itchy Thighs: This sit down shuckel is a forward aft style shuckel that is combined with rubbing your hands on your thighs to get the full body workout. I call it the itchy thighs shuckel, because if you had no idea what was flying you would think the person had itchy thighs.

The hand wash: You must be very yeshivish to do the hand wash sit down shuckel, this is done at a very slow pace and as the person shuckels back and forth they look as if they are ring their hands together to lather up soap, one bucher told me they refer to it as “air washing” similar to air guitar, only more ridiculous. The hand wash is traditionally done in situations where the person shuckling is giving a shiur or chabura.

Knee grasp: As if to steady themselves these shucklers grab their knees as they move forward and backwards. These shuckels tend be of quicker motion and at a time when the person has a well used siddur that stays open to the place.

Table grab side to side: This shuckel is only for experts in the shuckling field, seriously it takes a lot of know how to pull this off correctly. The shuckler places both hands on the edge of the table and shuckels side to side rather then back and forth.

Violent then pause: Another complex shuckel made for yeshivish folks, you mjust move forward with violent force and upon reaching the end of the shuckel you must pause momentarily, stand up people also do this and I have no idea why, it messes with my rhythm.

Traditional sit down: Just move forward and aft slowly but with timed shuckels and with smoothness. Many BT’s and YU kids do this without venturing into more complex sit down shuckels, but you have got to have respect for anyone that does a sit down shuckel.

Table slide: The table slide is similar to that of the itchy thighs shuckel in that the shuckeler will slide his hands along the table while going back and forth, just another way to get that upper body workout in during second seder.

Other moves that can be combined with a sit down shuckel: Fist bumps, thumb dips, the pointing finger (denoting that something is assur) the lip curl (for hard gemaras) and the restless leg syndrome that yeshiva guys love to do while learning.

← Relationships are like blowing the shofar!
Does wife swapping in the frum community actually exist? →

20 comments for “Guide to the sit-down shuckel”